ARE THESE JOE BIDEN'S PARTNERS?

Three drug cartels are reported to be the main instigators of violence in the border state of Baja California, Mexico, and California according to a list of 115 alleged cartel members recently unveiled by Mexico’s military.

The Mexican Defense Secretariat (Mexican Army)  revealed that the fugitives are part of the Jalisco New Generation Cartel (CJNG), the Sinaloa Cartel, and the resurgent Tijuana Cartel.

( SCROLL DOWN PAST SERVERAL  ADS)  BELOW

According to official reports, between January and June 2022, 9,754 crimes have been committed in Baja California — ranking fifth nationally. The main conflict between the antagonistic groups is the control over the drug retail points on both sides of the border including the northern area of Tijuana, which borders San Diego.

In 2020, Baja California registered the highest rate of drug dealing crimes, according to official reports from the National Institute of Statistics and Geography (INEGI). The reports include data from the National Census of State Justice Prosecution (CNPJE), which registered 322 drug dealing investigation folders for every 100,000 citizens — almost four times more than the rate in Mexico, which is 82.7. 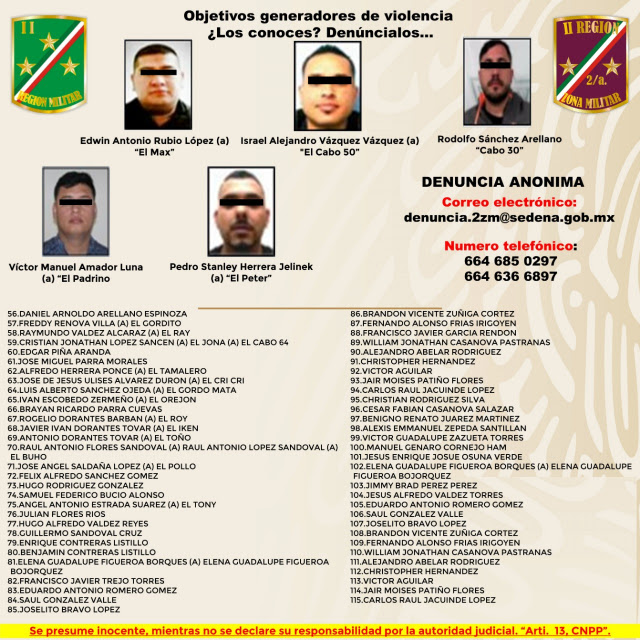 Of the 115 priority objectives, the Mexican military  highlighted ten names of cartel operatives:

Baja California is a strategic location for the operations of Mexican drug cartels not only for the border with the United States but also because of the unique dynamic tied to regular and irregular migration. In this region, the trafficking of people and goods has historically been present since the beginning of the 19th century.

According to the book, “The Century Drugs,” by Mexican analyst, Luis Astorga, in the northern part of the country, where Baja California is located, there was a record in the 1960s of at least 300 clandestine airports which helped to consolidate Mexico as the main supplier of marijuana and heroin to the United States.

(SCROLL  MUCH  FARTHER DOWN TO TO THE VERY BOTTOM )

Between 1990 and 2020, authorities from the two countries found at least 184 tunnels under Mexico’s borders with California and Arizona.

At the time, the United States Immigration and Customs Enforcement agency (ICE) recognized that between 1990 and 2011, 155 tunnels had been detected, some with sophisticated infrastructures such as electricity and air conditioning.

Editor’s Note: Breitbart Texas traveled to Mexico City and the states of Tamaulipas, Coahuila, and Nuevo León to recruit citizen journalists willing to risk their lives and expose the cartels silencing their communities.  The writers would face certain death at the hands of the various cartels that operate in those areas including the Gulf Cartel and Los Zetas if a pseudonym were not used. Breitbart Texas’ Cartel Chronicles are published in both English and in their original Spanish. This article was written by “Dharma Fernández” from Baja California.