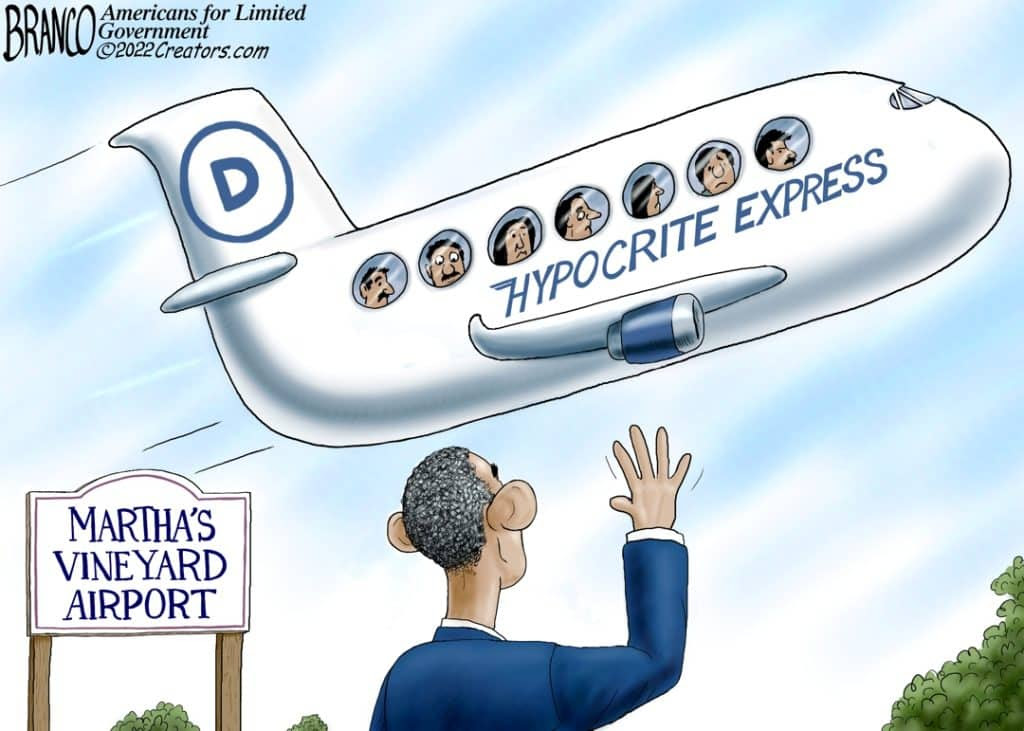 Martha’s Vineyard declared itself a “sanctuary destination” early in opposition to former President Donald Trump’s administration immigration policies, according to recent reporting by the Public Broadcast System, sanctimoniously expressing their opposition to deporting people who cross our borders illegally.

To be clear about what this means, here is what the woke online encyclopedia, Wikipedia, says that the term sanctuary city means: “Sanctuary city refers to municipal jurisdictions, typically in North America, that limit their cooperation with the national government's effort to enforce immigration law. Leaders of sanctuary cities say they want to reduce fear of deportation and possible family break-up among people who are in the country illegally, so that such people will be more willing to report crimes, use health and social services, and enroll their children in school. In the United States, municipal policies include prohibiting police or city employees from questioning people about their immigration status and refusing requests by national immigration authorities to detain people beyond their release date, if they were jailed for breaking local law.”

So what did Barack Obama’s chosen post-presidency home do when faced with fifty illegals that the federal government shipped from the border to Florida and Florida Governor Ron DeSantis then bussed to the elite Massachusetts enclave?

After putting together 50 beds and giving them a good meal, the Massachusetts National Guard arrived and the “sanctuary” proceeded to round up the riff raff and ship them off to a military base for handling.

Yep, they deported them from their beautiful city to a more suitable government internment camp.  So, to recap, after spending a few thousand dollars on some fast food, and providing a few cots for those foisted upon them by the mean old, DeSantis, the liberal elites called armed personnel and had them removed from their city to a detention holding area.

The PBS article quotes the tweet of a very proud Massachusetts state representative Dylan Fernandes, “Our island jumped into action putting together 50 beds, giving everyone a good meal, providing a play area for the children, making sure people have the healthcare and support they need.  We are a community that comes together to support immigrants.”

And then calls the military and deports them from the area.

Somehow, the woke sanctuary crowd doesn’t even see the irony as they stand in sanctimonious solidarity that hundreds of thousands should be allowed to come across the border each month, so long as they don’t end up in their home town.

It is interesting to note that the immigrants that Martha’s Vineyard rejected were originally from Venezuela, a modern socialist horror show.  Perhaps if the residents got their maids to speak with these illegals, they might have learned that in real-life, the Venezuelan policies they support for America always lead to poverty and despair.

But at the very least, the people of Martha’s Vineyard have been blessed with the tale for the upcoming holidays of the time when the Florida Grinch sent a bunch of people who didn’t belong to their shores and they generously provided overnight hospitality until the authorities arrived to whisk the squalid indigent away from their paradise to a place that was out of sight — and out of mind.

Rick Manning is the President of Americans for Limited Government.

The top elected Republican in the country, Senate Minority Leader Mitch McConnell, is abandoning the competitive Arizona Senate race — and potentially a Senate majority — to maintain a conference he can control in the upper chamber.

“The cancellations mean that the GOP’s leading super PAC won’t be spending any money in Arizona, one of the most closely watched Senate races in the country,” Axios reported, adding that McConnell’s allies are “confident other outside conservative groups will make up much of the difference.”

The $7.5 million tally from outside groups compiled by Axios, however, is far from making up “much of the difference” where Masters is outspent by Kelly upwards of 9 to 1, according to campaign finance data from OpenSecrets. And hosting a fundraiser for Masters, as McConnell has planned in lieu of direct financing, is mere lip service to claim the Republican Senate leader still supports the party’s Arizona nominee.

The reality is that McConnell would rather run a Senate minority that’s beholden to the octogenarian lawmaker than a majority with solid Republicans who refuse to kiss the ring. The decision to pull nearly $10 million from the Arizona race comes less than a month after McConnell’s super PAC canceled another $8 million in ads planned for Masters. During the Republican Senate primary, Masters said he would not back McConnell for another term in GOP leadership. Alaska Republican Senate candidate Kelly Tshibaka, whose contest is tied against incumbent Sen. Lisa Murkowski has also pledged to vote for someone else to lead the Senate conference.

After McConnell began to pull support from the Arizona race, an independent super PAC affiliated with Heritage Action for America stepped up to inject $5 million into the contest where Masters is within striking distance of Kelly. According to the RealClearPolitics latest aggregate of polls — which are often biased to shape rather than reflect public opinion — Masters is down by just over 3 points, less than two months before November. McConnell, however, appears content to let Masters slip.

Unsubscribe or Manage Your Preferences
Th
...