BIRTH CERTIFICATE OBAMA PROVIDED PROVES NOT TO BE VALID

THE DEMOCRATS CONTINUE THEIR WAR AGAINST TRUTH

I knew that the KKK was Democrats but I didn't know that they murdered white Republicans.

Email ThisBlogThis!Share to TwitterShare to FacebookShare to Pinterest
Labels: KKK-Democrats

IS HOLDER 'ABOVE THE LAW' OR JUST ANOTHER CRIMINAL WITH PULL?

WHY HASN'T ERIC HOLDER BEEN INDICTED YET? –
FAX CONGRESS NOW
Two honorable US agents, dozens of Mexican police officers and thousands of Mexican citizens have been slaughtered with Eric Holder's Fast & Furious guns. And now it appears that Holder's guns did not simply walk across the border, but were knowingly and specifically delivered to one of the world's most vicious drug cartels.
In proceedings filed in a Chicago federal court, defendant Vicente Jesus Zambada-Niebla claims that the Department of Justice struck a deal with leaders of the Sinaloa drug cartel, in which cartel leaders received Fast & Furious guns in exchange for providing information and assistance against other drug and crime cartel organizations. 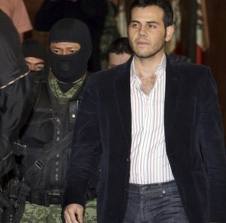 While some might dismiss defendant Jesus Zambada-Niebla's testimony as a drug runner's desperate attempt to wiggle out of a hefty conviction, think again.

Email ThisBlogThis!Share to TwitterShare to FacebookShare to Pinterest
Labels: Smoking Gun in Fast and Furious ties Holder to criminal acts

TELL CONGRESS: WE WILL NOT STAND BY AS
OBAMA DELIVERS ISRAEL TO HER ENEMIES!
Dr. Rashad Bayoumi of Cairo University was asked in an interview with the Arabic daily al-Hayat, if the government of Egypt is required to recognize Israel. He responded: "This is not an option. Whatever the circumstances, we do not recognize Israel at all. It's an occupying criminal enemy."

OBAMA THRILLS ON WASTING OUR MONEY - LOOK AT THE WASTE

A MUST READ - OUR COUNTRY HAS BEEN STOLEN

Our Government Is Obsolete
Neal Ross
In 1791 Thomas Paine wrote a book entitled The Rights of Man in which he said, “When I contemplate the natural dignity of man, when I feel (for Nature has not been kind enough to me to blunt my feelings) for the honour and happiness of its character, I become irritated at the attempt to govern mankind by force and fraud, as if they were all knaves and fools, and can scarcely avoid disgust at those who are thus imposed upon.” I can relate to how Paine must have felt when he wrote those words because disgust is the overriding sentiment I feel towards a good many people in this country.
Although there has been a renaissance of sorts, an awakening by citizens concerned with the actions of their government, has it come too late in the game to make a difference when it comes to preserving our few remaining unalienable rights?
Read more »
Posted by Lee S. Gliddon Jr. at 2:41 PM No comments:

LIBERALS WEEP ONLY TO SHOW THEIR INANITY

We are beset by the Liberal media as they seek to vilify our troops for doing what has been done since wars began. Taliban combatants have drawn and quartered our captured soldiers, beheaded them and now scream 'foul' when we pissed on them!

To the Liberals I say, 'GET A GRIP!'  Pastor Lee

There's been a lot of discussion by the mainstream media about an internet video purportedly depicting US Marines urinating on the bodies of Taliban combatants in Afghanistan.

The liberal media has done exactly what you would expect: denigrated our troops, lambasted US foreign policy, and claimed that this is why the terrorists want to kill Americans.
Read more »
Posted by Lee S. Gliddon Jr. at 2:35 PM No comments:

Email ThisBlogThis!Share to TwitterShare to FacebookShare to Pinterest
Labels: Liberal media is wrong...we should ask our troops to urinate on the Taliban

ARE YOU A 'TRUE CONSERVATIVE' OR JUST WILLING TO TALK?

Submitted by: Nancy Battle
RESISTANCE OR APATHY - VICTORY OR DEFEAT IN 2012
By Greg Evensen
January 14, 2011
NewsWithViews.com
Many, many times I have been asked about armed resistance to national tyranny, leaving no doubt that those who want this to occur are ready, prepared and anxious to do so. Still others are very angry, but unwilling to commit to anything other than their own arguments and a belly full of Budweiser loudmouth. Agenda warriors wave the flag for their pet peeve but are unwilling to use their real names for anything other than a “Facebook” entry. I have been insulted by patio patriots who like rare steak, but don’t like the sight of blood. “Do something,” they shout, “but leave me alone. I don’t want to lose my internet service.”
Read more »
Posted by Lee S. Gliddon Jr. at 2:05 PM No comments:

Email ThisBlogThis!Share to TwitterShare to FacebookShare to Pinterest
Labels: Resistance or Apathy

SOUTH CAROLINA - SAY 'NO' TO OBAMNEY

NO to Obamey. Wise up!

Email ThisBlogThis!Share to TwitterShare to FacebookShare to Pinterest
Labels: South Carolina...no to Obamaney

LEARN THE CONSERVATIVE TRUTH NOT WHAT THE MSM GARBAGE BEING FED

Submitted by: Nancy Battle
Since the 'truth' on the main media esp. on TV has been propagandized and compromised....I thought you might like to put this 'link' in your Favorites and listen to these hosts discuss 'news' with 'call-in's' invited.
Nancy
http://www.governamerica.com
Posted by Lee S. Gliddon Jr. at 1:25 PM No comments: