COULD IT BE THAT TRUE UNEMPLOYMENT IS AT 57%?

Donald Hank TELLS THE TRUTH ABOUT UNEMPLOYMENT DATA!
Reading just now about unemployment, I was inspired to do a rough calculation of REAL unemployment. I say "rough" because the most recent census reports I could find for working age Americans were from 2010. But note that these "working age" numbers are way on the high side. I estimated from ages 18 to 64, but that adds in a lot of people who don’t belong in this group: college students, who would be around 21 or 22 by the time they hit the work force, and a very large number of people who retired at 60. So I think we can assume that this number is actually oversized, at least enough so to account for the unknown increase since 2010. Thus I think we can work with them. If you add up the two groups reported in the working age bracket, 18-44 with a total of 112,183,705, and 45-66, with a total of 61,952,636, you get a total of 174,136,341 working age people.
Read more »
Posted by Lee S. Gliddon Jr. at 3:54 PM No comments:

GLOBAL ECONOMY IS A 'MELTDOWN MODE'

Submitted by: Donald Hank
We need a moratorium on all LEGAL immigration (1.1 million per year) AND the Southern Border shut down by troops.
http://thedavelevineshow.ning.com/profiles/blogs/may-jobs-adjusting-for-immigration-much-worse-than-liberal-and
Posted by Lee S. Gliddon Jr. at 2:18 PM No comments:

MSM AND DEMOCRATS PROMOTING OUR NEXT ECONOMIC CRISIS!

Posted 06/01/2012 06:53 PM ET
Finance: Governments in the U.S. and Europe are forcing private banks to buy up government debts - debts that may turn sour down the road, decimating banks' balance sheets. This is a recipe for another financial crisis.
It has become an enduring national myth - repeated dutifully by Democratic politicians and their mainstream media lapdogs in recent years - that commercial banks "caused" the financial crisis.
They didn't.
Even so, banks are still demonized for it. Because of this, they're now being forced to buy the bad debts of our out-of-control federal government.

Read each and LEARN!

I recently made headlines on the Huffington Post -- one of the biggest liberal news sources -- for speaking against Obama’s betrayal of Americans over real marriage.

He has tried to cover up his flip flop on homosexual “marriage” by describing it as evolution -- and I called him out on it.

You and I both know that he has been working to further homosexual “marriage” for years while continually telling his supporters otherwise -- this just makes it official.

The Homosexual Lobby couldn’t be happier to have a President who openly supports their agenda, but they are also worried.

They know that many in the Obama camp only supported him because they believed he would defend marriage.

Well his deceit is finally public for everyone to see.And I will not let the leftist elite like the Huffington Post stop me from speaking out about it.

While I am frustrated with those who unknowingly put a radical homosexual activist in the White House, I cannot help feeling sorry for them as well.

They were all deceived.

Below is a video I made over three years ago.

In it I interviewed Obama supporters who were just leaving his presidential inauguration...

...and every single one of them expressed their absolute commitment to real marriage. One man and one woman.

When will the administration accept that the majority of Americans do not want homosexual “marriage” in our country? 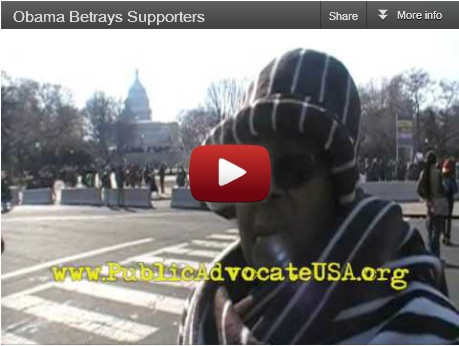 
P.S. Please prayerfully consider chipping in with a donation of $10 or more to help Public Advocate fight for traditional values.