OUR 'FISCAL CLIFF' A CHANCE MISSED FOR HONEST REFORM

President Obama's latest, 'show,' was another effort to sell his followers the false belief he actually wants to stop tax increases. In all truth he and his Congressional cohorts want increased spending, higher taxation, and the demise of the Republican Party.

When Obama stood before the Liberal Media and asserted the claim that it was, "now time for Congress to do it's job," he intended to convey to America that it was the House of Representatives standing in the way of progress.

This is a lie and if he does not know that as a fact then he is totally out of touch with reality!

Also, when Obama says that the Republicans have yet to list the cuts they want to set forth he is lying yet again.

The House of Representatives has PASSED numerous Bills that are totally budget related. Those Bills list items to be cut as well as initiatives that strengthen our Economy as well as easing the Unemployment burden that exists.

Where are those Bills?

Gun and ammunition sales have been rising over the last few years, as have the number of concealed weapon permits being issued across the country. Please note I am not referring to the recent panic buying spree of semi-automatic weapons since the Sandy Hook school shooting. What is the real reason behind the rise of weapon sales and increase in concealed carry permits? Who might be to blame, or if you are a manufacturer or gun store owner, who could be thanked?  What if I told you it is national talk show host Michael Savage? Don’t believe me? Read on.
Read more »
Posted by Lee S. Gliddon Jr. at 1:46 PM No comments:

WILL CONGRESS EVER 'WAKE UP' TO OBAMA'S TRUE INTENTS?"

Obama and his plans for TyrannyBe warned. Obama and his ‘hate America’ destruction team have always needed crisis, to crush freedom after freedom. Remember, years back in his first term run for President, Obama described our Constitution as problematic and dated, while attacking our very Star Spangled banner as too bellicose and bloody. Our Constitution, Bill of Rights and Judeo Christian values are simply in the way........http://www.newswithviews.com/Roth/laurie355.htmby Laurie Roth

Beware of ‘fiscal cliff’ pessimismBy Aaron Blake of The FixUpdated: December 28, 2012To hear Hill staffers and top negotiators tell it, it’s very likely that the country is headed over the “fiscal cliff.”Take that with a grain of salt.The last days of any high-stakes deadline situation in Congress are fraught with these kind of doomsday prophecies. That’s not to say House and Senate leaders are lying when they say the cliff may be unavoidable; indeed, getting something to pass this late in the game remains very difficult. But it’s also true that these things often seem hopeless until, well, they don’t.Both sides have little motivation to budge in the final days of a negotiation. After all, the longer you hold out, the more time you give your opponents to become the first to blink. 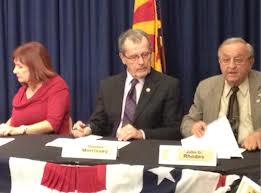 "I'm not satisfied with what I've seen," said Tom Morrissey, head of the Arizona Republican Party, before casting his vote for Mitt Romney.
"I think for somebody in the president's position to not have produced a document that looks more legitimate, I have a problem with that."
John Rhodes and Don Ascoli, two other GOP electors, likewise expressed their alarm over Obama's suspect credentials.
Ascoli hit the nail on the head, saying the fact that a majority of Americans voted for Obama after years of eligibility concerns is irrelevant to the validity of the concerns. He cited the Bill Clinton-Monica Lewinsky scandal as a case in point for how fragile is the ground for trusting our elected officials to be honest with us.
"The majority of the people had no dream that Bill Clinton did what he did until a young lady had a blue dress and proved he did," Ascoli said. "And he had to come out and apologize to the world because he lied to you and me."
The American people DESERVE THE TRUTH!
HELP SHERIFF JOE AND THE COLD CASE POSSE TAKE THIS CASE TO COURT!
DEMAND PROOF POSITIVE – SELECT HERE NOW!
Read more »
Posted by Lee S. Gliddon Jr. at 10:31 AM No comments:

Email ThisBlogThis!Share to TwitterShare to FacebookShare to Pinterest
Labels: Criminal charges against Obama

An activist judge in North Carolina said prosecutorial racism was the reason he commuted the sentences of four convicted killers.
Described as three of the state’s most notorious death row killers, among the group’s victims are three law enforcement officers, two women and a teenager. The judge was able to overrule the first sentence under the state’s controversial Racial Justice Act.
Commuting a black man’s death sentence to life in prison, the judge cited “the persistent, distorting role of race in jury selection in North Carolina.”
He never argued the man – found guilty of kidnapping and robbing a teenager before shooting him in the face – might be innocent. Since the Racial Justice Act gave him the discretion, he simply declared prosecutors were racist and gave a murderer a get-out-of-death-row-free card.

QUITE SIMPLY - THE FED MUST BE AUDITED

Alert: Demand Harry Reid and the Senate to bring S. 202 to a vote and pass the Federal Reserve Transparency Act!
They must hand this ever-important bill to the President before the conclusion of the Lame-Duck session! Send Faxes Here. Dear Conservative, The 'fiscal cliff' debate is in swing, and the U.S. Congress is clamoring to find so-called solutions through coming to a bi-partisan "compromise" on financial matters. So far they are off to a terrible start: already we have seen the GOP establishment boot out fiscal conservatives from key committees, and we have also seen that the "no tax" Republicans want to raise taxes by the billions! Sen. Rand Paul comments, stating: "One party proposes 800 billion in tax increases. In an effort to counter them and continue to be the "low tax, small government" party, the other party's leadership proposes....wait for it...800 billion in tax increases." He adds, "As my good friend Jim DeMint says, if you are speeding toward a cliff at 80mph, putting on the cruise control is not really a viable solution."

Email ThisBlogThis!Share to TwitterShare to FacebookShare to Pinterest
Labels: Audit the FED

On Thursday, December 27, 2012 Americans learned of the passing of General H. Norman Schwarzkopf, Jr.  General Schwarzkopf was best known for his successful command of U.S. and Coalition Forces in Operations Desert Shield and Desert Storm in the early 1990’s, following Saddam Hussein’s invasion of Kuwait. All electrical devices stilled and rendered inoperative with no injuries!

Submitted by: Kathy Hawkins
The Latest From “DHS Insider”

Note from TPATH Editor,
During the past several months we have been following reports coming from this "Department of Homeland Security Insider" as covered by the Hagmann Report.  Doug Hagmann is a well respected investigator but TPATH has felt that the information coming out from this insider may have been exaggerated and sensationalized.  But now, after months of watching almost everything this man has said, either come true or occurring as we speak, we felt it was time to share this with our readers and let them decide.
Because if even a little of this is accurate, this country could very well be headed for a catastrophic future in which many people will not survive.
TPATH is not verifying this report but it is imperative that people take precautions and prepare for what may be ahead.
End Editor Note.

Do you think this could never happen in America?
Would you bet the lives of your family, it would not?
Introduction: After a lengthy, self-imposed informational black-out, my high-level DHS contact known as “Rosebud” emerged with new, non-public information about plans being discussed and prepared for implementation by the Department of Homeland Security (DHS) in the near future. It is important to note that this black-out was directly related to the aggressive federal initiative of identifying and prosecuting “leakers,” at least those leaks and leakers not sanctioned by the executive office—the latter of which there are many. Due to those circumstances, my source exercised an abundance of caution to avoid compromising a valuable line of communication until he had information he felt was significant enough to risk external contact. The following information is the result of an in-person contact between this author and “Rosebud” within the last 48 hours. With his permission, the interview was digitally recorded and the relevant portions of the contact are provided in a conversational format for easier reading. The original recording was copied onto multiple discs and are maintained in secure locations for historical and insurance purposes.
Read more »
Posted by Lee S. Gliddon Jr. at 9:30 AM No comments:

Email ThisBlogThis!Share to TwitterShare to FacebookShare to Pinterest
Labels: DHS, Obama intends to quell any detractors

CHINA WOULD LOVE TO SEE AMERICA DISARMED BY LIBERALS!

CHINA BACKS OBAMA-FEINSTEIN
CALLS TO DISARM AMERICANS!
Our Elected Officials MUST Hear from YOU!
The Communist Chinese government is calling for Americans to be disarmed, arguing for "no delay" in exploiting the Sandy Hook school tragedy by the Obama administration in push for U.S. gun control!
SAVE OUR SOVEREIGNTY AND OUR SECOND AMENDMENT!
SELECT HERE TO DEMAND CONGRESS STOP THE OBAMA PLOT TO
DISMANTLE OUR RIGHT TO KEEP AND BEAR ARMS! 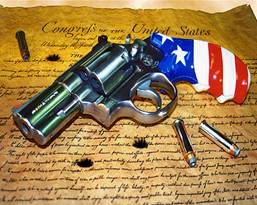 Our Founding Fathers saw fit to arm the American people to defend against criminals invading our home, against tyrannical government, and against foreigners invading our country from abroad. Now, with a 'Manchurian President' FAR more interested in maintaining and extending his own grasping power, and in appeasing foreign leaders than in upholding our Constitutional rights, it is more critical than ever before we make OUR voices heard to Congress and the courts!
Read more »
Posted by Lee S. Gliddon Jr. at 9:16 AM No comments:

Email ThisBlogThis!Share to TwitterShare to FacebookShare to Pinterest
Labels: China wants all American citizens to be disarmed

WHY GUNS ARE NOT BAD

"The Gun Is Civilization"

Human beings only have two ways to deal with one another: reason and force. If you want me to do something for you, you have a choice of either convincing me via argument, or force me to do your bidding under threat of force. Every human interaction falls into one of those two categories, without exception.

Reason or force, that's it.

In a truly moral and civilized society, people exclusively interact through
persuasion.  Force has no place as a valid method of social interaction and the
only thing that removes force from the menu is the personal firearm, as paradoxical as it may sound to some.

When I carry a gun, you cannot deal with me by force. You have to use reason and try to persuade me, because I have a way to negate your threat or employment of force.
Read more »
Posted by Lee S. Gliddon Jr. at 9:08 AM No comments:

Email ThisBlogThis!Share to TwitterShare to FacebookShare to Pinterest
Labels: guns as necessary

LEARN HOW THE WHOLE BENGHAZI AFFAIR WAS PUT IN PLACE

It took some 22 hours for American help to arrive in Benghaziafter all the t’s had been crossed and the i’s had been dotted, and the body of America’s ambassador to Libya had been dragged through the streets by “rescuers” stopping along the way to pose for cell phone pictures with his corpse.
Read more »
Posted by Lee S. Gliddon Jr. at 8:56 AM No comments: