STOP TRYING TO PROTECT OBAMA AND START DOING YOUR JOB!

We are learning that the first minutes of the Benghazi attack on our Consulate were known by Obama, the VP, the Secretary of Defense and none of them acted to do anything to protect our Ambassador or any Americans.

To date I have read only third or fourth page articles about this Benghazi fiasco where it should be front page news!

Our Ambassador was subjected to torture, demeaned, bloodied and that was no short and swift occurrence. To that man it must have seemed an eternity.

We have heard noting but cover-ups, excuses, exaggerations and downright lies from the Obama Administration. Even in the final debate Obama said, "we acted immediately." NOT SO!

We have air bases, aircraft carriers, and forces within a one-hour flight time that could have been activated. Even if they could not have landed to attempt saving our men, they could have done a 'close cover' fly by and scared the crap out of the terrorists conducting that attack. We could have sent helicopters to the area...But, Obama chose to do absolutely nothing and the Press is letting him get away with the MURDER of Americans in Libya.

As a blogger I posted the name as well as details concerning the man who masterminded this attack! He is Al Qaeda and was, as of this day, enjoying a drink at a sidewalk cafe. Does this sound as if Obama is, "doing all that is possible to bring the people who did this to our countrymen to justice?'

Are you, a FREE PRESS, going to sit silent and allow Obama to gain reelection for ideological reasons? Are you so callous toward that U.S. citizenry that life of Americans abroad no longer have meaning?

The facts are very clear. Al Qaeda masterminded the attack. The Obama Administration was advised of that fact as the attack was in progress. We had a drone overhead. We knew it was not the results of a video or film about Islam. We lost countrymen...will you do anything or just remain silent?

CHRISTIANS MUST VOTE FOR CONSERVATIVE VALUES

Mathew Staver, Founder and Chairman
Liberty Counsel
The late Dr. Jerry Falwell’s stated mission for The Moral Majority was to “reverse the politicization of immorality in America.”  The Liberty Counsel family of ministries has long called Americans to “Pray and Vote.” Now, in 2012, Dr. Billy Graham is asking America’s people of faith to “Vote Biblical Values.”
These election-time messages were all designed to achieve the same objective – to take a step toward the restoration of America’s moral foundations.  That’s why Liberty Counsel wholeheartedly supports Billy Graham’s call to Bible-based action. Together, we are working to “Take Back America in 2012.”
Please see my important message below about this critical initiative.  America’s future depends upon it! – Mat.
Conservatives,

Dr. Jerry Falwell wrote…
“It has become evident that we have neglected to maintain constant vigil over our religious freedoms. The withdrawal of faith-based citizens from the public square has emboldened the forces of darkness to declare that our values are no longer welcome.
Read more »
Posted by Lee S. Gliddon Jr. at 5:33 PM No comments:

OBAMA 'ONE UPS' ROMNEY AS GM GOES TO CHINA!

Obama claims success in bailing out General Motors, but why is China reaping the benefits promised us?

The Consequences Of Obama’s Love Of Islam – Exclusive: Nonie Darwish On Why BHO Didn’t Provide Security Needed In Benghazi
http://beforeitsnews.com/obama/2012/10/the-consequences-of-obamas-love-of-islam-exclusive-nonie-darwish-on-why-bho-didnt-provide-security-needed-in-benghazi-2445194.html

Short e-newsletter this evening.  Too much on the proverbial plate this close to Election Day…including my research into those “non-partisan” judicial and other races.

Speaking of which, I’ll begin sharing my thoughts and recommendations on this year’s balloting tomorrow or the next day. So if you’re not 100% sure of EVERYBODY and EVERY ballot issue…don’t vote early!  Help is on the way.

Now, with that out of the way…

Our own Dan Burdish, Citizen Outreach’s CEO and “man with the plan,” is scheduled to be on C-SPAN’s “Washington Journal” tomorrow morning from 6:30 – 7:00 a.m. Pacific.  HostJohn McArdle will kick off the program by asking a few questions about the elections, particularly as they relate to Nevada, followed by questions from viewers from across the country.

DEMOCRATS FOLLOW THE LEAD OF OBAMA AS THEY SPEW HATRED

Oct 23, 2012 12:21 pm Despite the issue garnering a significant amount of media interest as well as the attention of the Secret Service, Obama supporters continued their threats to riot and assassinate Mitt Romney if Obama loses in the aftermath of last night’s presidential debate. As we reported last week, Twitter has been flooded recently with violent comments from [...]Read More and Comment: Obama Supporters Continue Threats To Riot, Assassinate Romney


Is Obama Beginning To Crack?

Hatred in that stare

ABC News Targets Sheriff Joe for Defeat!
We were warned that gutter attacks on stand up Americans would get worse. We just didn’t know how ruthless and widespread the attacks would be… 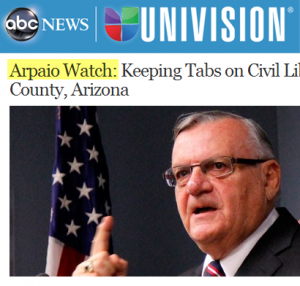 ABC News has teamed up with Univision in a nationwide effort to defeat Sheriff Joe Arpaio with less than 30 days to go before the election.
Don’t let Obama’s media minions get away with this! Please, make you emergency donation to help us defend Sheriff Joe against Leftwing lies before it’s too late!
Stand With Arizona first reported this disgusting evidence of our national media playing politics rather than doing their job.

Our top20 national, hot news, selections for dissatisfied, pro-USA Americans.
From: To: The National MiddleClass Network & Tea Parties
"Regardless of party, everyone needs to know the "real" news. We provide; You decide."   These columns  are not necessarily our views; more in fairness to both sides. So, please keep the feedback coming. Thanks.
Note: Also, as many now know, we are having IP issues. So, if you've received this NewsMail in error or  wish to be removed, please let us know. So far, those so requesting since this inception is virtually zero. Thanks again.
TSA Yanks Porno Scanners from 2 Major NY Airports Real October Surprise? Trump Making Major Announcement On Fraudster Obama This Week  Real October Surprise? Donald Trump Making Major  Announcement On Fraudster Obama This Coming Week Via Donald Trump @ Twitter (Hat tip Acetylide)Donald Trump @ Twitter: "I'll be makin United Nations Foreigners Interfering with US Voting
From: Suzanne
State and City Elected Official:
Hubbard (below) is displaying his True American Patriotism.  The Illinois voters should not have to be insulted by the United Nations infringing upon our voting rights and procedures.  Please follow the Example of Mike Hubbard from Alabama and start immediately with the legislation to ban NON-U.S. CITIZENS FROM BEING POSITIONED AS POLL WATCHERS.
Yes, we do want and we deserve a Fair and Honest Election Process, but this is THE DUTY OF ALL AMERICAN AND ALL OF OUR ELECTED OFFICIAL DISPLAYING THEIR TRUE AMERICAN PATRIOTISM AND PROTECTING AND DEFENDING OUR CONSTITUTION.  All of our Elected Officials must act responsibly and honestly and abide by our Constitutional laws and hold their Allegiance to our America.
If our Elected Officials live up to the trust that was given to them within their said position, then we will have Fair and Honest Elections.....Do not disgrace and belittle our country and yourselves and all of the American Citizens.....STOP THE UNITED NATION FROM INFRINGING UPON OUR RIGHTS WITHIN OUR AMERICA......NOT ONLY START PASSING LEGISLATION TO STOP THE U.N. FROM INSULTING OUR VOTING PROCESS, BUT START PROCEEDINGS IN WHICH THE UNITED STATES OF AMERICA REMOVES THEMSELVES FROM THIS INHUMANE ORGANIZATION.     Suzanne C. Short
From: "Frank"
Moves to Block United Nations Poll Watchers from Operating in Alabama
http://weaselzippers.us/2012/10/22/awesome-alabama-house-leader-moves-to-block-un-poll-watchers-from-operating-in-his-state/
BY CLIFF SIMS

1. Speaking of Bayonets… this is the Tomb of the Unknown Soldier, MISTER President.
Note the equipment used there. . . . please click here for the rest of the post →

Throughout the debate, Mitt Romney smiled, agreed, and avoided fights. Barack Obama did everything he could to get into fights. That’s not what incumbents in a comfortable lead do.

The biggest issue to come out of this debate, though, was Barack Obama totally claiming that sequestration was Congress’s fault — he signed it into law — and that it would not happen, despite it being the law of the land.

Within mere moments after the conclusion of the debate, the Obama camp already walked it back. It is never good for the President of the United States when, immediately upon conclusion of a must win debate, his campaign team is already walking back his bold statements. His jokes about sequestration will haunt him in military towns and his dismissiveness of the American Navy will hurt him in key swing states.  . . . please click here for the rest of the post →
Read more »
Posted by Lee S. Gliddon Jr. at 10:27 AM No comments: