UNCONSTITUTIONAL LAWS ARE NOT LAWS

Email ThisBlogThis!Share to TwitterShare to FacebookShare to Pinterest
Labels: When are laws not laws?

Fracking is seen by economists as an answer to our energy problem. It is a process that can be used to extract fuel from rock that was once impossible to extract economically. If America succeeds in harnessing the process it could become energy independent for years to come.
But the left has been telling us this chemical process is unsafe.
And the right, while defending fracking, does a lousy job of making the science and toxicology understandable to you the public. Same applies to the left.
I have spent over 40 years translating mostly food patents and food science articles and was struck by the fact that many of the supposedly scary chemicals are used in food manufacture and the left has never had a problem with that as far as I know.
So here is what I have found so far.
Wiki article on fracking chemicals.
http://en.wikipedia.org/wiki/Hydraulic_fracturing
What percentage of the fracking fluid is chemicals?
Typically, of the fracturing fluid 90% is water and 9.5% is sand with the chemicals accounting to about 0.5%.
Chemicals used:
Read more »
Posted by Lee S. Gliddon Jr. at 3:08 PM No comments:

Email ThisBlogThis!Share to TwitterShare to FacebookShare to Pinterest
Labels: Fracking

DO NOT ALLOW REID TO KILL FILIBUSTER

Email ThisBlogThis!Share to TwitterShare to FacebookShare to Pinterest
Labels: Keep the Filibuster

THE LEADER'S WEEKLY SCHEDULE
WEEK OF JANUARY 21ST
MONDAY, JANUARY 21ST
On Monday, the House will meet at 10:00 a.m. for the Inauguration of Barack Obama as the 44th President of the United States. No votes are expected in the House.
TUESDAY, JANUARY 22ND
On Tuesday, the House will meet at 10:00 a.m. for morning hour and 12:00 p.m. for legislative business.
H.R. 307 - Pandemic and All-Hazards Preparedness Reauthorization Act of 2013 (Suspension, 40 Minutes of Debate) (Sponsored by Rep. Mike Rogers (MI) / Energy and Commerce Committee)
WEDNESDAY, JANUARY 23RD
On Wednesday, the House will meet at 9:00 a.m. for legislative business. Last votes expected no later than 3:00 p.m.
Legislation Conditioning an Increase in the Nation's Debt Limit Upon Congress Passing a Budget
THURSDAY, JANUARY 24TH, AND FRIDAY, JANUARY 25TH
On Thursday and Friday, no votes are expected.
COMMITTEE ACTIVITY OF THE WEEK
Foreign Affairs Committee hearing on “Terrorist Attack in Benghazi: The Secretary of State’s View” (Wednesday, January 23, at 2:00 p.m.)
Printable PDF

ERIC HOLDER TELLS THE JOKE OF THE YEAR! FUNNY...ITS ONLY JANUARY!

OUR MOST INEPT PRESIDENT EVER - 'GREAT?- - LAUGHABLE

TELL ME WHAT IS SO GREAT ABOUT BH OBAMA
by
Debbie
Under the deceptive leadership of BH Obama, the USA has had two credit down
grades. A third credit down grade is imminent. Using chicanery, Obama announced, “We
don’t have a spending problem.” He has asked the Congress to raise the debt ceiling once
again; he intends to keep right on spending.
BH Obama blames George W. Bush for the current financial toilet that is sucking
the USA down into the dark, odoriferous sewer of financial collapse. George W. Bush
did not have a credit down grade. No other President has had a credit down grade in the
history of America.

Will you please tell me why people think BH Obama is so great? He
has violated the US Constitution and the Bill of Rights. Obama has bullied vulnerable
senior citizens: he threatened to cut off their Social Security payments. Obama has
threatened the US Military: he threatened not to pay them; the young men and women
who keep the USA safe. The people who daily put their lives on the line so that American
Citizens can be safe.
Read more »
Posted by Lee S. Gliddon Jr. at 2:35 PM No comments:

AT LEAST RUBIO IS SEEKING LEGISLATION NOT DICTATING!

Saturday’s issue of The Wall Street Journal  featured the most recent edition of the "Weekend Interview” in which the senator from Florida laid out a series of reforms to U.S. immigration policy sure to incite conversation about the issue on the road to the elections of 2014 and 2016. Although Rubio’s ideas will certainly seem a boon in a deficient policy debate to some and will simultaneously turn off others, the young senator has proven willing to take on tough issues. But will his stance prove to be practical policy and palatable politics?

'OBAMA'S LAW?' WHEN DID HE GAIN THE RIGHT TO LEGISLATE?

A self-professed illegal alien who spoke at today's "Campaign for Citizenship" event tells MRCTV that, after 20 years of hiding, she's now "safe" to admit her status publicly. Read the Full Story

Poll: Obama's hiding something
Politico/World Net Daily More than a third of Americans--and 64 percent of Republicans--believe that President Barack Obama might be hiding something, according to a new poll Thursday. Read the Full Story
Posted by Lee S. Gliddon Jr. at 2:15 PM No comments:

Email ThisBlogThis!Share to TwitterShare to FacebookShare to Pinterest
Labels: What is Obama hiding from us?

OBAMA STOOD BEFORE MUSLIMS IN CAIRO AND LIED

MUSLIM HERITAGE IN America and Canada :

Have you ever been to a Muslim hospital, heard a Muslim orchestra, seen a

Muslim band march in a parade, witnessed a Muslim charity, shaken hands
with a Muslim Girl Scout, seen a Muslim Candy Striper, or seen a Muslim
do anything that contributes positively to the American way of life?  Have
you ever heard of a hospital founded by Muslims?  How about Muslim
outreach programs following an earthquake or tsunami?  So how has the
Muslim faith been a part of America's history?  ANS: Sep. 11, 2001
US Ambassador Stevens was sodomized and tortured before
the Muslims killed him.  How is that for an outreach program?
Barack Obama,
during his Cairo speech, said:
"I know, too, that Islam has always been a part
of America 's history."
Read more »
Posted by Lee S. Gliddon Jr. at 12:14 PM No comments:

Email ThisBlogThis!Share to TwitterShare to FacebookShare to Pinterest
Labels: No Muslims in American History

CONGRESS HAS THE POWER TO STOP THIS MADNESS

Are we losing our country?Yet, so few in America become involved to hold what we have left. Every month of the year, our Congress pours another 100,000 legal immigrants into this country. Virtually all of them from third world countries! Is it any wonder our education, graduation and literacy rates sank to the bottom? Is it any wonder that 47.7 million Americans feed off food stamps and assisted housing.....http://www.newswithviews.com/Wooldridge/frosty833.htmby Frosty Wooldridge

GUNS ARE NOT ONLY FOR HUNTING - LIBERALS GOTTA LEARN THAT FACT!

Gun Control, Dick Act of 1902, Bills of Attainder and Ex Post Facto LawsOur Framers were all for an armed American People – they understood that arms are our ultimate defense in the event the federal government oversteps its bounds. See, e.g., what James Madison, Father of Our Constitution, writes in the second half of Federalist Paper No. 46! The reason the Citizens – the Militia – are armed is to defend ourselves, our families, our neighborhoods, communities, and States from an overreaching.....http://www.newswithviews.com/Publius/huldah114.htmby Publius Huldah
Posted by Lee S. Gliddon Jr. at 11:50 AM No comments:

Email ThisBlogThis!Share to TwitterShare to FacebookShare to Pinterest
Labels: defense from oppressive government, Dick Act of 1902

OBAMA'S FOREIGN POLICY IS DANGEROUS TO THE ENTIRE WORLD

Submitted by: BobJen
From:   To: The NationalMiddleClassNetwork & TeaParties...These columns  are not necessarily our views; more in fairness to both sides. So, please keep the feedback coming. Thanks. Also, as many know, we are having IP issues. So, if you've received this NewsMail in error or wish to be removed, please let us know. So far, those so requesting since this inception is virtually zero. Thanks again
WEAPONS OF CHOICE-Obama's disgusting use of kids as pawns -Diana West
Sher Zieve-News and Commentary-In all things, trust God"Thou Shalt have no other gods before me"Yes it is and yes it did...
From: John Rolls
Obama Executive Order: Peacetime Martial Law!http://beforeitsnews.com/politics/2012/03/obama-executive-order-peacetime-martial-law-1906406.html
NY Dems Plan Gun Confiscation
NY Gun Ban Makes Police Criminals 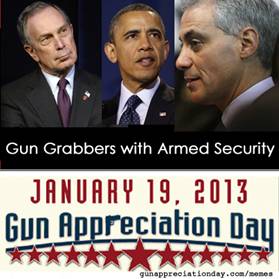 URGENT: Conservative Rep. Thomas Massie (R-KY) RE-INTRODUCED last week the "Citizens Protection Act" to repeal the 1990 law (deemed unconstitutional only to be re-written and passed in 1996) that made our schools 'defense free' kill zones where only madmen can arm themselves.
The 112th Congress ended without doing anything to protect our children – the 113th MUST PROTECT OUR CHILDREN, THEIR TEACHERS AND ADMINISTRATORS from gun control laws that DO NOT WORK!
The Second Amendment WORKS!
REPEAL THE GUN FREE SCHOOL ZONES ACT – PASS H.R. 133!
BLAST-FAX CONGRESS TO PASS THIS LEGISLATION TODAY!
Read more »
Posted by Lee S. Gliddon Jr. at 11:16 AM No comments:

ENOUGH IS ENOUGH - MSM MUST STOP COVERING FOR OBAMA

President Obama and Eric Holder want to know everything about your business.  They want Obamacare doctors to collect every piece of information they can about your life.  When you have newborn the hospital gives you a questionnaire that includes questions like: Do you have any firearms in your home?
At the same time the Obama administration is blatantly hiding information about some of their guns, specifically the guns they handed to the drug cartels in an operation known as Fast and Furious.  See our government has an obligation to furnish information to the governed when requested and when a patriot group called Judicial Watch filed a freedom of information act request, a request the tyrant administration stonewalled.  This is no surprise considering that after months of us applying pressure Holder was called to testify before the House Oversight Committee.  His testimony led to him being held in contempt of congress, which the media mostly ignored except to label it as a ridiculous witch-hunt.
When the United States House of Representatives issues a contempt of congress to the sitting Attorney General (read the nation's top cop) and it is completely ignored, the entire rule of law is called into question.
Read more »
Posted by Lee S. Gliddon Jr. at 11:11 AM No comments:

Email ThisBlogThis!Share to TwitterShare to FacebookShare to Pinterest
Labels: Obama/Holder fingerprints all over Benghazi, Operation Fast and Furious

Email ThisBlogThis!Share to TwitterShare to FacebookShare to Pinterest
Labels: Oregon Sheriff to Biden

1.  The Allure of Moving On
Bend over Republicans, here they come again.

They want to move on.

They want the next fight. So desperate are they to move on, in January of 2013, House Republicans want their base to know they think they’ll lose the House in November of 2014unless they cave now so please let them cave.