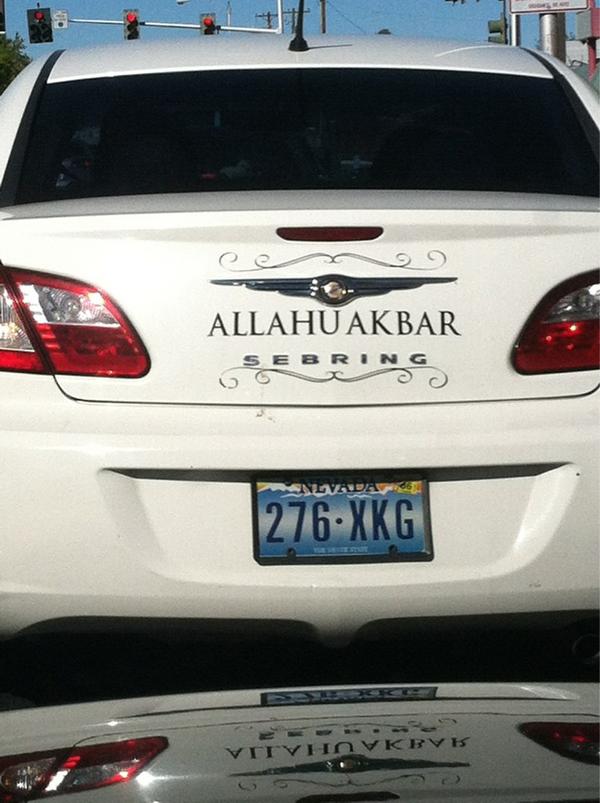 * I ended up behind this numb-nut (see photo to the left)driving westbound on Bonanza at Las Vegas Blvd. today.

Can you imagine someone driving a car like this through the streets of Pakistan with the phrase “Jesus Saves” tattooed on the trunk?  Thank God we live in the United States!

* Sometimes in life you’re blessed simply to know certain wonderful people.  Me, I’m blessed to know Bobby Ellis. And when you click here to watch this short video clip, you’ll understand why.

Still Thinking About Voting for Obama?

This is a very powerful 7 minute video that is well worth watching no matter who you are or what political affiliations you may have.
The Marxists know that the only way to impose their socialist tyranny on future generations is to destroy everything that has made America exceptional.
America is currently in decline, but the damage done is not irreversible.
What happens tomorrow still depends on what each one of us does today… or fails to do.
Please forward this to everyone on your mailing list and ask them to do the same.

HOLDER AND GEITHNER AMONG THOSE NAMED IN MASSIVE LAWSUIT! CRIMINAL ACTION?

Submitted by: Donald Hank
> http://www.marketwatch.com/story/major-banks-governmental-officials-and-their-comrade-capitalists-targets-of-spire-law-group-llps-racketeering-and-money-laundering-lawsuit-seeking-return-of-43-trillion-to-the-united-states-treasury-2012-10-25
>
> Press release
> Oct. 25, 2012, 2:09 p.m. EDT
> Major Banks, Governmental Officials and Their Comrade Capitalists Targets of Spire Law Group, LLP's Racketeering and Money Laundering Lawsuit Seeking Return of $43 Trillion to the United States Treasury
>
> NEW YORK, Oct. 25, 2012 /PRNewswire via COMTEX/ -- Spire Law Group, LLP's national home owners' lawsuit, pending in the venue where the "Banksters" control their $43 trillion racketeering scheme (New York) - known as the largest money laundering and racketeering lawsuit in United States History and identifying $43 trillion ($43,000,000,000,000.00) of laundered money by the "Banksters" and their U.S. racketeering partners and joint venturers - now pinpoints the identities of the key racketeering partners of the "Banksters" located in the highest offices of government and acting for their own self-interests.

“After 4 days of early vote in Nevada,” maintains the Republican National Committee’s communications shop at GOP.com, “Republicans have made significant gains over 2008 performance, cutting into the Democrat’s traditional early vote advantage.”

That’s pure spin.  As Jon Ralston put it in a series of tweets Wednesday afternoon:

“GOP message on early/mail balloting in NV: We are destroying the Democrats by losing by much less than we did in '08. … I honestly don't understand GOP spin here: Obama won NV by 12 in '08. It was a landslide in a wave election; McCain abandoned NV….  Of course, GOP is doing much better in '12. It's like a football team that went 0-16 starting off 2-6. We suck, but we don't suck as bad!”

The raw fact is this: Almost 20,000 more Democrats had voted statewide than Republicans after 4 days of early voting.  It’s ominous.  But it’s not hopeless.  Consider this VERY basic scenario…

According to the Secretary of State’s statewide numbers of ballots cast in early/absentee balloting combined, 99,415 Democrats had voted; 79,697 Republicans had voted and 35,497 “others” had voted.
Read more »
Posted by Lee S. Gliddon Jr. at 2:22 PM No comments:

ALABAMA - We The PEOPLE Newsletter #202

We the People - Alabama Newsletter #202

We the People – Alabama will be publishing one more, possibly two newsletters before the November 6 election.
We sincerely hope that our efforts have helped our readers make an informed decisions about what they want for the future of our children and grandchildren.

1. Money Is Just An Illusion
http://beforeitsnews.com/economy/2012/10/money-is-just-an-illusion-2458744.html
2. Banks & Investors Preparing For The Collapse Of The Euro Economic Meltdown By 2013
http://beforeitsnews.com/economy/2012/10/banks-investors-preparing-for-the-collapse-of-the-euro-economic-meltdown-by-2013-2458748.html

Oct 26, 2012 12:55 pm Adding another wild-card to the 2012 campaign’s final days, a former aide to Vice President Joe Biden has written a tell-all Washington memoir in which he lacerates the former Delaware senator as an “egomaniacal autocrat” who was “determined to manage his staff through fear.” The book is hardly an objective study of the vice president, [...]Read More and Comment: Former Joe Biden Aide Writes Angry Tell-all

Email ThisBlogThis!Share to TwitterShare to FacebookShare to Pinterest
Labels: Biden, facts about an egotistical maniac

SEND THIS TO ALL LIBERAL OBAMA SUPPORTERS YOU KNOW

Oct 26, 2012 02:07 pm
Give this video seven minutes and then go pull the level for Obama on November 6th, if you can. Related posts: Are Jewish Voters Thinking Twice About Voting For Obama? Ira Foreman has a tough job nobody could imagine would… Democrat Congressional Candidate Refuses To Say He’s Voting For Obama Even Democrats don’t want to [...]
Watch the Video and Comment: Video: Must-Watch Vid: Still Thinking About Voting For Obama?

AND THEY CONTINUE TO VOTE FOR THIS MONSTER

Oct 26, 2012 02:13 pm
Luke Rudkowski hits the streets of NYC to find out where Obama supporters really stand on his policies. Now he did this in an underhanded way where the policies where presented to be Romney’s, but this was only done to get an honest opinion. The reactions when the truth was uncovered varied but they were [...]
Watch the Video and Comment: Video: Obama Supporters Actually Hate Obama’s Policies

(2 articles) VOTER FRAUD AND MUST BE PROSECUTED


Will Voter Fraud Taint This Election?

Oct 26, 2012 02:30 pm America used to have the most democratic elections in the world. It doesn’t anymore. Antiquated technology, along with the failure to clean dirty voter rolls of dead and moved voters, plus gridlock blocking efforts to fix the problems, have left our system in shambles. The highly respected Pew Center reports that 1.8 million dead people [...]Read More and Comment: Will Voter Fraud Taint This Election?
Read more »
Posted by Lee S. Gliddon Jr. at 1:43 PM No comments:

Email ThisBlogThis!Share to TwitterShare to FacebookShare to Pinterest
Labels: callous, Obama not only inept, uncaring and well over his head

The Ultimate Incentive for Companies to Move to NevadaBy Chuck MuthOctober 25, 2012 In my last column I noted how wrong it is to use taxpayer dollars to “bribe” companies in other states with tax breaks to move to Nevada; tax breaks companies already here aren’t getting.  And look, if reducing taxes is what it takes to lure companies to move here from other states, then isn’t that pretty much an indication that our existing taxes on businesses are too high and maybe we should be reducing the tax burden on everybody, not just those the government sees fit to favor? Which brings me to a different argument often put forward as to why more companies aren’t moving here: The sorry state of public education.  In fact, here’s what former University Chancellor Jim Rogers recently wrote on this very subject:

ANCHOR BABY SCAM AND WE PAY FOR IT!

FEDERAL GIVEAWAY! IT IS OUR MONEY BEING USED TO BUY VOTES!

Submitted by:Donald Hank
UN's "Virtuous Green Path" Leads Straight To Mass-Death
Jurriaan Maessen
Infowars.com
October 17, 2012
All arms of the scientific dictatorship appear to move in unison. As of late we hear repeated calls for de-industrialization of the developed world by the global elite. In addition an attempt is being made by the elite to integrate so-called "population issues" into other issues such as poverty, "climate change" and other phantoms of doom necessary to fulfill the ancient eugenic utopia. With the objective of plunging mankind into a new agrarian age, and depopulating the planet while they're at it, the global elite have set up a broad approach which self-described ecosocioeconomist professor Ignacy Sachs has euphemistically dubbed a "virtuous green path", more commonly known as Agenda 21.
A 1991 policy paper prepared for the United Nations Conference on Environment and Development (UNCED) outlines a strategy for the transfer of wealth in name of the environment to be implemented in the course of 35 to 40 years. As it turns out, it is a visionary paper describing phase by phase the road to world environmental dictatorship. As professor Sachs states in his paper:
Read more »
Posted by Lee S. Gliddon Jr. at 1:08 PM 1 comment:

1. Beyond Unconscionable. This Is High Treason…AC-130U Gunship Was On-Scene In Benghazi,
Obama Admin Refused to Let It Fire
http://beforeitsnews.com/terrorism/2012/10/beyond-unconscionable-this-is-high-treason-ac-130u-gunship-was-on-scene-in-benghazi-obama-admin-refused-to-let-it-fire-2444464.html

. “Your First Time”
There seems to be no low to which President Obama will sink in his desperate attempt to win reelection.  One has to wonder, is there any point at which the main stream media and the public get some self-respect and toss out this loser?  First he asked for your wedding gifts, then your yard sales and now he has asked for your daughters.

Just in case you didn’t watch Obama’s newest ad, and who could really blame you, it’s aimed at young, female voters who may be virgin… voters.  The actress gushes about how special the first guy should be and how you wouldn’t want to show up at a party and be discovered as being, “not ready.”  Lena Dunham allows herself to be used in this cheap, last minute attempt to be the first for young women.  Dunham, who was raised in a wealthy, over-sexualized household and who started therapy at age 7 must somewhat be forgiven for her role; she seems to have a thing for talking about her first time, the Obama administration was just happy to oblige.  The problem is, this is an adult man, with two young daughters, who should know better. . . . please click here for the rest of the post →
Read more »
Posted by Lee S. Gliddon Jr. at 12:44 PM No comments: