SENATOR SCHUMER REVELS IN LIBERAL CONTROL OF THE U.S. SENATE

Sen. Schumer on the State of the Union: “We Are in Great Shape”Senator Chuck Schumer (D-NY) says of Obama’s SOTU address: “The Republican speaker last night, Mitch Daniels, talked about ‘Americans must talk about the state of the union as grave.’ So, we think we are in great shape. We are in good shape.” Watch the video here ...Read More
Posted by Lee S. Gliddon Jr. at 4:58 PM No comments:

Are George Soros, The IMF And The World Bank Purposely Trying To Scare The Living Daylights Out Of Us?Over the past couple of weeks, George Soros, the IMF and the World Bank have all issued incredibly chilling warnings about the possibility of an impending economic collapse. Considering the power and the influence that Soros, the IMF and the World Bank all have over the global financial system, this is very alarming. So are they purposely trying to scare the living daylights out of us? Soros is even warning of riots in the streets of America. Unfortunately, way too often top global leaders say something in public because they want to “push” events in a certain direction. Do George Soros and officials at the IMF and World Bank hope to prevent a worldwide financial collapse by making these statements, or are other agendas at work? We may never know. But one thing is for sure – many of the top financial officials in the world are using language that is downright “apocalyptic”, and that is not a good sign for the rest of 2012. Right now, George Soros is saying things that he has never said before. Just check out what George Soros recently told Newsweek ...Read More
Posted by Lee S. Gliddon Jr. at 4:55 PM No comments:

Email ThisBlogThis!Share to TwitterShare to FacebookShare to Pinterest
Labels: Liberals and Soros

DEMAND THAT HOLDER BE HELD ACCOUNTABLE

Obama's Green Loans Scam Erupts In Flames
Defund Obama's Green Loans Scam - SEND FAXES
TO ALL 100 SENATORS - NOW!
ALERT: Forget about capitalism - now we have Obamalism. Obama is pouring billions of dollars into green energy rackets and rewarding his top donors with multi-million dollar green loans.
Over and over again Obama chooses to interject big government into the free markets. In 2009 he nationalized Chrysler and GM spending over $80 billion dollars of taxpayer money to bailout the failing companies.
His plans to revive the car companies failed miserably. In the end Obama's reckless bet resulted in a $14 BILLION DOLLAR LOSS! Even with billions of cash at their disposal,

Charities I support
http://tartanmarine.blogspot.com/2011/09/charities-i-support.html
Raid In Somalia: U.S. Military Frees Hostages Held Since October
http://www.huffingtonpost.com/2012/01/25/raid-in-somalia_n_1230062.html?ref=email_share
Excerpt: The same U.S. Navy SEAL unit that killed Osama bin Laden parachuted into Somalia under cover of darkness early Wednesday and crept up to an outdoor camp where an American woman and Danish man were being held hostage. Soon, nine kidnappers were dead and both hostages were freed. (Go Navy. What is really needed is to put a Marine Battalion ashore with orders to exterminate every pirate it can find. ~Bob.)
Read more »
Posted by Lee S. Gliddon Jr. at 1:05 PM No comments:

The State of Illusion Address, 2012

Jan 25, 2012 12:35 pm
Barack Obama’s State of the Union Address joined his other public remarks as an exercise in virtual reality. In addition to its jaundiced view of the free market and overly rosy view of the present economic crisis, his speech contained a number of factual errors, misleading statements, and outright lies. 1. “The Taliban’s momentum has [...]Read More and Comment: The State of Illusion Address, 2012
Posted by Lee S. Gliddon Jr. at 11:15 AM No comments:

Email ThisBlogThis!Share to TwitterShare to FacebookShare to Pinterest
Labels: State of The Union (Illusion)

Video: Congressman, SOPA is a “Cripping Danger to the Internet”

Congressman McClintock delivered the following speech on the House floor on Monday, January 23, 2012. It shows the Congressman’s dedication to freedom and his perceptive understanding of the dangers creeping government infringements pose to our First Amendment liberties. — Ed.. Madam Speaker: Long ago, Jefferson warned, “The natural progress of things is for liberty to [...]

Watch the Video and Comment: Video: Congressman, SOPA is a “Cripping Danger to the Internet
Posted by Lee S. Gliddon Jr. at 11:12 AM No comments:

Email ThisBlogThis!Share to TwitterShare to FacebookShare to Pinterest
Labels: NO to SOPA and PIPA

Our country's constitutional balance is in jeopardy.

That's why your National Right to Work Foundation filed the first legal challenge to President Barack Obama's purported "recess" appointments to the National Labor Relations Board (NLRB) -- which he made in clear, unprecedented defiance of Congress and the Constitution. 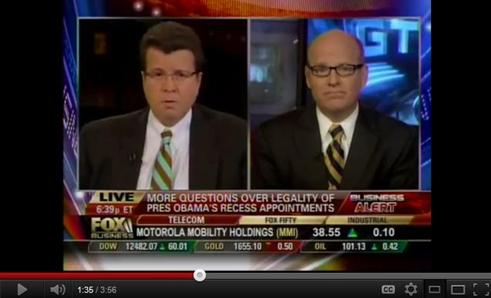 Last week, I appeared on "Your World with Neil Cavuto" on the Fox Business Network to discuss our case against this unconstitutional power grab by the Obama Administration to reward Big Labor.

DO NOT ALLOW YOUR RIGHTS TO BE TAKEN FROM YOU

The most egregious legislation negatively affecting our once constitutionally guaranteed liberties lately seems to come via a “national security”  rationale. The National Defense Authorization Act (NDAA) and its “indefinite detention” clause is a classic example of liberty-robbing legislation that ignores constitutional restraints put in place to protect against tyranny. Our current leaders seem content to cooperate with these assaults on freedoms, or haven’t the courage to stand up against the encroaching tyranny because they continue to offer excuses for voting for such abuses.

To quote The New American’s Joe Wolverton II, J.D., on the NDAA’s indefinite detention, “Under the provisions of Section 1021, the President is afforded the absolute power to arrest and detain citizens of the United States without their being informed of any criminal charges, without a trial on the merits of those charges, and without a scintilla of the due process safeguards protected by the Constitution of the United States.” This provision gives the President “absolute power to indefinitely detain American citizens suspected (by him) of being ‘belligerents,'” Wolverton added, for those who had any doubt about the effect of the bill.

Email ThisBlogThis!Share to TwitterShare to FacebookShare to Pinterest
Labels: NDAA INFRINGES ON OUR RIGHTS

WE ARE DROWNING IN DEBT AS CONGRESS THROWS US A BRICK

Under Penalty of DeathA nation that once was abundantly prosperous drowns in its own debt. A nation that was once considered a light on a hill, a place of refuge, a place where the citizens dwelt in peace with their neighbors; where doors were never locked and children could frolic safely in their neighborhoods have now become communities which are places of vile evil, disorder, chaos and fear......
http://www.newswithviews.com/Paugh/butch104.htm
by Butch Paugh

Email ThisBlogThis!Share to TwitterShare to FacebookShare to Pinterest
Labels: Drowning in debt

OBAMA IS, BY HIS OWN ADMISSION, A RACIST

Team Obama Re-Election Gimmick: Is America a Post-Racial Society?The post-racial discussion is absurd, divisive, and a waste of time -- a distraction from real issues. The fact that America elected a black man to be leader of the free world confirms that Americans think post-racially. Blacks are only 12% of the U.S. population. Even if every black in America voted for Obama, without millions of white votes, Obama would not have been elected. Are we a post-racial society? Of course we are........
http://www.newswithviews.com/Marcus/lloyd219.htm
by Lloyd Marcus

Tax the People via Taxing the RichI’m not sure when Americans lost their collective minds, or exactly what caused it to happen, bad drinking water, FDA engineering of food supplies, chem trails, public education…. But I am convinced that many Americans are off the reservation. According to a recent Rasmussen Report, 47% of Americans favor taxing “the rich” but oppose.....
http://www.newswithviews.com/JBWilliams/williams173.htm
by JB Williams

Email ThisBlogThis!Share to TwitterShare to FacebookShare to Pinterest
Labels: Obama and taxes

1. The State of the Union

2. We’re Fighting Over Two Guys and Neither Side Thinks the Other Can Win

CAMPAIGNING IS NOW A 'PRESIDENTIAL DUTY'

Proving, Yet Again, That He Believes That He Is Above The Law, Barack Obama Has Stated That He WILL VIOLATE A Court Order And Not Attend His Eligibility Hearing In Georgia!

And just in case you're thinking that he will be too busy performing his presidential duties to comply with a court order, think again. Instead, he'll be campaigning in Las Vegas, Nevada.

It's an outrage. The man who has played over 73 rounds of golf, hits the campaign trail endlessly and has taken scores of lavish tax-payer funded vacations, simply can't be bothered to comply with a court order and prove that he is indeed eligible to hold and seek the office that so many believe he has usurped.

Email ThisBlogThis!Share to TwitterShare to FacebookShare to Pinterest
Labels: "Blame anyone but us" Obama's plea, in his mind he is above the law
Newer Posts Older Posts Home
Subscribe to: Posts (Atom)