TEXAS REPRESENTATIVE FROM CONGRESS STEVE STOCKMAN IS A WINNER!

UPDATE: Congressman Threatens To Impeach Obama Over Coming Gun-Grabbing Executive Order. Congress Is Finally Getting The Message And Your Blast Faxes Will Help Drive The Point Home.

You read that right.  It was just reported by the Daily Caller and linked by the Drudge Report: "Texas Republican Rep. Steve Stockman threatened Monday afternoon that he would file articles of impeachment against President Barack Obama if he institutes gun control measures with an executive order."        Stockman specifically said: "If the president is allowed to suspend constitutional rights on his own personal whims, our free republic has effectively ceased to exist... I will seek to thwart this action by any means necessary, including but not limited to eliminating funding for implementation, defunding the White House, and even filing articles of impeachment."        Congress is getting the message. If you haven't sent Blast faxes yet, NOW IS THE TIME TO DRIVE THE POINT HOME.
Read more »
Posted by Lee S. Gliddon Jr. at 5:46 PM No comments:

3. Tyranny Never Comes Without Warning: People Ignore The Writing On The Wall
http://beforeitsnews.com/alternative/2013/01/tyranny-never-comes-without-warning-people-ignore-the-writing-on-the-wall-2535370.html

WE DO NOT NEED ANOTHER LIAR IN THE OBAMA ADMINISTRATION

KERRY LIED ABOUT U.S. WAR CRIMES AND
ABOUT SERVING IN CAMBODIA – SO
WHAT WON'T HE LIE ABOUT FOR OBAMA?
SWIFTBOAT VETS RENEW FIGHT AGAINST 'COMRADE'
(Oh Wait, Kerry Wasn't Even There…)
URGENT: Without so much as a ripple in the pond pre-Christmas, Barack Hussein Obama nominated strategic liar (and U.S. Senator from Massachusetts) John Kerry to replace Hillary Clinton as Secretary of State for the next four years. And really is it any wonder that with so much to cover up (BENGHAZI), Barack Obama appointed a VETERAN who has built a career shamelessly exploiting the faith and loyalty Americans feel for our military – and lying about his service in Vietnam for political gain? No, it isn't.
BLOCK JOHN KERRY'S CONFIRMATION AS SECRETARY OF STATE
BLAST-FAX CONGRESS TO DEFEAT KERRY'S APPOINTMENT – SELECT HERE! 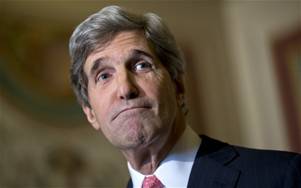 While most of the Swift Boat veteran debates center around John Kerry's bravery or cowardice during his service in Vietnam, few Americans are fully aware of Kerry's outright, bald-faced lies about serving in Cambodia which he started (in written record, at least) in a 1979 letter to the Boston Herald.
The Washington Post reported in 2004 that Kerry then repeated these total fabrications on at least EIGHT DIFFERENT occasions in Senate debate or political interviews and that Kerry made his Cambodia LIE the centerpiece of a PREPARED 20 minute speech against aiding Nicaraguan contras in 1986! Can you say, 'pathological liar'?
BLOCK JOHN KERRY'S CONFIRMATION AS SECRETARY OF STATE
BLAST-FAX CONGRESS TO DEFEAT KERRY'S APPOINTMENT – SELECT HERE!
The Washington Post reads:
Read more »
Posted by Lee S. Gliddon Jr. at 2:59 PM No comments:

Email ThisBlogThis!Share to TwitterShare to FacebookShare to Pinterest
Labels: another liar not neededa, BLOCK John Kerry

AMNESTY IS NOT THE WAY!

I had recently said that immigrants allowed to enter illegally and en masse to the US would eventually suffer the same fate as immigrants to Europe who had once been given favored treatment by the government over the objections of the people but are now personae non gratae.
I had mentioned the fascist party Golden Dawn in Greece and their virulently anti-immigrant stance. And please be aware that most of the immigrants in Europe who are being shown the door by a once-hospitable populace are NOT illegal immigrants, unlike most of our immigrants. If you think the European backlash is cruel, wait until welfare checks to Americans either start to bounce or fail to pay basic needs! People will start to wonder why the amnestied immigrants had been getting the same sweet treatment as our welfare kings and queens or as people who tried hard to get work and failed.
Read more »
Posted by Lee S. Gliddon Jr. at 2:39 PM No comments:

Email ThisBlogThis!Share to TwitterShare to FacebookShare to Pinterest
Labels: Amnesty granted to Illegal Aliens is not the way

WRITE CONGRESS AND DEMAND A TOTAL STOP TO ANY NEW SPENDING

Jan 12, 2013 06:10 pm There has been plenty of confusion and misinformation about the national debt, the fiscal cliff, and new taxes on Americans thanks in part to the use of clever White House talking points and a complicit national media. Let’s clear up some of the current issues with facts and truth by looking at the numbers. According [...]Read More and Comment: Washington’s Spending Addiction And Fiscal Deception

Email ThisBlogThis!Share to TwitterShare to FacebookShare to Pinterest
Labels: No NEW spending, stop the addiction to spending

FOOD STAMPS ARE SUPPOSED TO BE TEMPORARY!

Jan 12, 2013 07:01 pm
The Obama administration has a rather relaxed policy for qualifying for food stamps. Related posts: State Gets $5 Mil Bonus For Food Stamp Sign Up In its quest to promote taxpayer-funded entitlement programs, the Obama… CBO: Food Stamp Use Explodes; I Want My EBT In fiscal year 2011, federal expenditures for the Supplemental Nutrition…
Watch the Video and Comment: Video: Obama: The Food Stamp President

Email ThisBlogThis!Share to TwitterShare to FacebookShare to Pinterest
Labels: bonus paid to states for signing up Food Stamp recipients

THE NEWS IS OUT! OBAMA'S APPOINTEE LEW A 'DUD'

Jan 14, 2013 12:30 pm Jack Lew, President Obama’s choice to replace Timothy Geithner as Treasury Secretary, has been in Washington DC a long time. Anyone in public service that long will have quite a record of public statements that will paint an accurate picture for Senators who are considering his nomination. Last week, I wrote about some of the [...]Read More and Comment: Opposition Grows As Jack Lew Proves He Doesn’t Understand Budgets

ALL (every single one) POLITICIANS MUST BE SUBJECTED TO BACKGROUND CHECKS!

Jan 14, 2013 01:25 pm Those who support Attorney Orly Taitz’s challenge to Barack Obama’s constitutional eligibility to serve as President are being urged to protest peacefully at inauguration proceedings on January 21, (the MLK, Jr. holiday,) and in front of the Supreme Court itself on February 15th when Justices will decide the merits of the challenge.  Those making this unnecessary [...]Read More and Comment: Protest Planned At Inauguration Over Obama’s Stolen Identity
Posted by Lee S. Gliddon Jr. at 2:16 PM No comments:

Obamacare has a clause which demands that ALL U.S. Citizens submit to having a MICROCHIP IMPLANTATION. This has been implemented and signed into law by Obama at the behest of Democrats.

The Christian Bible warns against this and although Democrats knew this they voted for our spiritual deaths!

If you risk becoming Islamophobic, PLEASE don't read these...

Submitted by: Donald Hank
..for Allah's sake.
I am sure that the 20 Arabs chasing these 2 helpless Hareidi Jews had good motives. No doubt they felt threatened, fearing they might be Islamophobes (no sense taking any chances). Why else would all 20 of them have chased them? Poor things.
See? I can be unbiased, just like the MSM. (How am I doing?).
AS for the Scottish campaign, how about treating the Muslims like feminists treat Christian men? You know, like dirt.
Don Hank (I am trying really hard to please my liberal readers).
Video: Arabs Gang Up on Hareidi Jews in Jerusalem
http://www.israelnationalnews.com/News/News.aspx/164113#.UPLiLW9ZVyD
Excerpt: A disturbing video began circulating on Facebook Saturday evening. It shows a group of about 20 Arabs ganging up on two helpless hareidi-religious Jews, kicking one of them, hurling snowballs in their faces and humiliating them. At one point, one of the Jews falls to the ground, apparently slipping on the ice as he is chased up some steps.
Read more »
Posted by Lee S. Gliddon Jr. at 12:54 PM No comments:

TRAVESTY AS MSM REMAINS SILENT - DOES THE LIBRAL PRESS CONDONE THIS KILLING?

Submitted by: Donald Hank
Authorities Discover More Christians Killed Over Christmas Holiday in Nigeria
http://www.persecution.org/2013/01/09/authorities-discover-more-christians-killed-over-christmas-holiday-in-nigeria/
Excerpt: Thirty people were killed in two separate attacks carried out by armed men ahead of the New Year, in North-eastern Nigeria . 15 people were killed in a single attack which occurred on Sunday 30th, when armed men stormed a church service in Kyachi village, outside Chibok, near Maiduguri . According to Mohammed Kanar, the regional coordinator for the National Emergency Management Agency (NEMA), the victims were shot by the attackers. (30 dead Christians are not a big deal, as long as it doesn't make anyone Islamophobic. That would be a tragedy. ~Bob.)
Read more »
Posted by Lee S. Gliddon Jr. at 10:53 AM No comments:

1.  Having to Choose
For the past 20 years, Louie Giglio has not focused on homosexuality. In fact, the controversy is a distraction from his important focus today on human trafficking. But gay rights activists are outraged that he dared say something twenty years ago that was then, as it is now, mainstream within Christian orthodoxy. It is something I agree with him on. It is something that, twenty years ago, would not have caused the outrage it is now causing.

2 Timothy 4:3-4 notes, “For the time is coming when people will not endure sound teaching, but having itching ears they will accumulate for themselves teachers to suit their own passions, and will turn away from listening to the truth and wander off into myths.” Secularists peddling a secular agenda in the name of tolerance have declared Truth to be myth and myth to be truth. They hear what they want to hear and condemn what they do not understand as intolerance. . . . please click here for the rest of the post →
Read more »
Posted by Lee S. Gliddon Jr. at 10:38 AM No comments:

Submitted by: Sandra
THE LUCIFERIAN ELITE AND THE DESTRUCTION OF AMERICA

By Paul McGuire
January 14, 2013
NewsWithViews.com
Everything you see happening around you is not the product of random chance. Millions have been brainwashed into not seeing the obvious, that the destruction of America is a planned event that was conceived before 1776. Sir Francis Bacon, a Rosicrucian, planned for America to be the New Atlantis and the center of the New World Order before America became a nation.
At the beginning of our nation we had a clash of worldviews. Many of our Founding Fathers had, to varying degrees, a Biblical world view. Others were Deists and many were part of the secretive Illuminati. The Rosicrucian movement traces its roots all the way back to a Nephilim leader called Nimrod and the Tower of Babel. The Tower of Babel in Babylon was to be the capitol of the first one world government, one world economic system and one world religion. The Tower of Babel was built to worship the host of heaven who were star gods… fallen angels who had come from the stars. It was the fountainhead of all the mystery and Luciferian religions.
Read more »
Posted by Lee S. Gliddon Jr. at 10:23 AM No comments:

Email ThisBlogThis!Share to TwitterShare to FacebookShare to Pinterest
Labels: Illuminati, One World Order, Order Out of Chaos created by Obama etal

OBAMA CANNOT CURE THE JOBS PROBLEM SO HE SHIFTS TO GUN CONTROL!

Why the left hates something – free enterprise, the “rich,” religion, Israel, America – says more about liberals than it does about the thing itself.

So it is with the left’s endless, and increasingly manic, drive for more of what it disarmingly calls gun control, which many acknowledge to be a series of way stations on the road to total confiscation. In a 1995 CBS “60 Minutes” interview, Senator Diane Feinstein (D–Haight-Ashbury) confessed, “If I could have gotten 51 votes in the Senate of the United States for an outright ban, picking up every one of them – Mr. and Mrs. America turn ‘em all in – I would have done it.” What’s the difference between Hitler, Stalin and Feinstein – besides the facial hair?
Read more »
Posted by Lee S. Gliddon Jr. at 10:10 AM No comments:

Email ThisBlogThis!Share to TwitterShare to FacebookShare to Pinterest
Labels: Why Liberals hate guns.