We all understand that North Korea’s leader is a few fries short of a happy meal.

But if he has even a scintilla of rationality in his pea-brained skull, PresidentDonald Trump’s declaration that any further threats against the U.S. by Kim Jong Un would be met with “fire and fury like the world has never seen” should have resulted in the need for a change of underpants by the nutjob dictator.

Trump has never given the impression of someone who embraces Obama-like vacillation and he pretty much seems to say exactly what’s on his mind. Kimmy should probably take the President’s words at face value.

By the way, and this will shock you (not), Sen. John McCain criticized the President’s declaration.  This “Never Trumper” never misses an opportunity to stick a knife in Trump’s back.  He is a collaborator in the Left’s coup efforts.

Sen. Richard Blumenthal (D-Conn) has been slamming President Trump for having not served in the military.  But at least Trump never pretended he did.

In case you missed it, Blumenthal is infamous for having claimed over and over again to have served in Vietnam when he didn't.  As the New York Timesrevealed way back in 2010, “He obtained at least five military deferments from 1965 to 1970 and took repeated steps that enabled him to avoid going to war.”

The effort to oust Nevada Sen. Dean Heller advanced further yesterday with the announcement that conservative businessman Danny Tarkanian would be challenging him in the GOP primary next year.

The Heller campaign responded by attacking Tarkanian for…having run as a candidate before.  Good luck with that.  Not exactly a scintillating bumper sticker slogan like “Repeal and Replace Dean Heller.”

It’s bad enough that Senate Majority Leader Mitch McConnell has been unable to repeal and replace ObamaCare despite have majority control, but yesterday he blamed President Trump for trying to rush it along.

Oh, puh-lease.  Republicans have had 7 years to get ready for this moment. ObamaCare should have been repealed MONTHS ago.  If Mitch can’t get the job done, it’s time for Republicans to put someone in charge who can.

Proving once again that you can always expect the unexpected from President Trump, yesterday he surprisingly endorsed incumbent U.S. Sen. Luther Strange, McConnell’s pick in the Alabama GOP special election primary, over the conservative choice of pro-Trumpers such as Sean Hannity, Mark Levinand Laura Ingraham.

Then again, it might not be all that surprising after all.  Strange’s opponent, Rep. Mo Brooks was a Ted Cruz supporter in the presidential race vs. Trump in 2016 and had some not-so-flattering things to say about him.  Say whatever else you want about Trump, he prizes loyalty.

And that might not augur well for “Never Trump” Sen. Heller next spring leading into the Nevada GOP primary.

Before everyone hops on their 1st Amendment high horse about Google firing a software engineer who wrote an internal memo challenging the company’s diversity policies and accusing the search engine giant of silencing conservative political opinions, keep assclown Colin Kaepernick in mind.

Yes, the software engineer has free speech rights.  But he did not have the right to free speech without consequences from his employer.  The 1st Amendment protects us from the GOVERNMENT retaliating against us.  It doesNOT protect us against other consequences.

My solution to both of these matters: Hire the Google engineer to quarterback the 49ers this season!

P.S.  My bad.  I forgot that some folks still prefer NOT to pay for things online…and I understand completely.

So if you want to register for the Conservative Leadership Conference and take advantage of our killer 2-for-1 Early Bird special, but would prefer to pay by check or fax in your information, click here 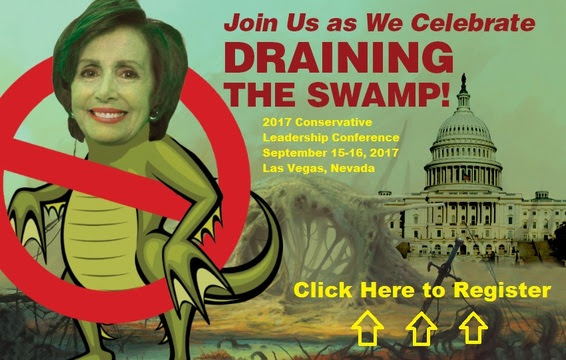 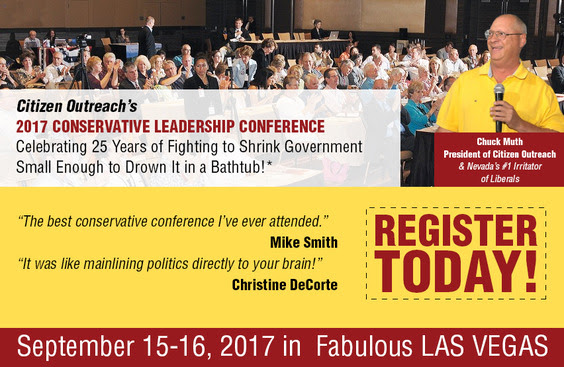 "Congressional Republicans' failure to pass a health care bill is starting to hit them where it hurts: their pocketbooks. At least $2 million in contributions promised to the National Republican Senatorial Committee have failed to materialize because donors are expressing frustration with the Senate GOP's inability to fulfill their central campaign promise to repeal and replace Obamacare, according to two GOP sources familiar with the matter." – Morning Score, 8/9/17

“If Republicans Lose Senate In 2018 It Will Be Greatest Self-Sabotage Event In History.” - Rush Limbaugh

“It's one of the earliest races to take shape -- and it's all bad news for (Nevada Sen. Dean) Heller.  Danny Tarkanian, who has lost five campaigns over the last decade but won the GOP nomination in four of those five races, is taking on Heller in the Republican primary.” – CNN, ranking Heller’s seat #1 in likelihood of flipping parties in 2018