MOVE ALONG FOLKS, IT'S ONLY A NUCLEAR WAR! 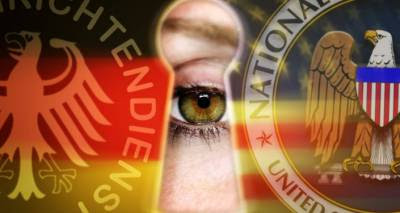 According to a news report in the June 7th German Economic News (Deutsche Wirtschafts Nachrichten, or DWN) headlined “Merkel entmachtet BND: USA kontrollieren Spionage in Deutschland” or “Merkel Ousts BND: US to Control German Espionage,” a new law will soon be passed in the German parliament and be approved by Chancellor Angela Merkel, which will make Germany’s version of the CIA, the Bundesnachrichtendienstes (BND), nothing more than a branch of the CIA.
The BND is to be subordinated to the CIA to such an extreme degree that even U.S. corporate espionage against German companies will become part of that  nominally German operation. The independent capacities of the BND will become emasculated, no longer operational, under the new law.

“In practice, this means that the US intelligence services [NSA] will be allowed to continue to listen in on every company and every individual in Germany.”
That includes the Chancellor herself, whose phone-conversations were previously embarrassingly revealed to have been listened-in upon by the NSA.  Now it’ll be legal.
This appears to be part of the West’s buildup toward a global war.  According to a report issued on June 6th in German Economic News, the German government is preparing to go to war against Russia and has in draft form a Bundeswehr report declaring Russia to be an enemy nation.  According to the DWN article: “The Russian secret services have apparently thoroughly studied the paper. In advance of the paper’s publication, a harsh note of protest has been sent to Berlin: The head of the Foreign Affairs Committee of the Russian State Duma, Alexei Puschkow, has posted this Twitter message: ‘The decision of the German government declaring Russia to be an enemy shows Merkel’s subservience to the Obama administration.’”
Back on February 17th, DWN had reported that German Chancellor Merkel “will develop a new military doctrine” which will declare that, “The ‘annexation’ of Crimea by Russia is the basis for military action against Moscow.”
Taken all together, these news reports from DWN indicate a clear subordination of the German government to the U.S. government, in a period of preparation for a NATO war against Russia.
However, not mentioned at all in the DWN articles — nor anywhere else in Western news media — is a crucial fact, a fact that the head of America’s ‘private CIA’ firm Stratfor acknowledged only when addressing a Russian-speaking audience because it reveals the fraudulence of the West’s alleged ‘justification’ for all of this economic and now also military action by the West against Russia: that the overthrow of Ukraine’s President in Russia’s neighboring nation of Ukraine during February 2014 was “the most blatant coup in history”  [author’s translation].  That coup, in turn, led to the separation from Ukraine of the two regions of Ukraine that had voted overwhelmingly for the president whom Obama had just overthrown. Extensive video documentation exists demonstrating that the overthrow was a coup, and even demonstrating that the Obama Administration had selected Ukraine’s post-coup leader 22 days prior to his being formally appointed by the Ukrainian parliament.
Furthermore, the only detailed scholarly study of the evidence that has been done came to the same conclusion — that it was a U.S. coup. The month leading to the coup was incredibly violent, with Obama’s hired fascists attacking the government’s security forces brutally.  Here is some of the bloodshed from the prior month, recorded on January 21st, then January 22nd, then January 25th 2014.  Moreover, immediately after the overthrow, when the EU sent its own investigator to Kiev to report back on how the overthrow had taken place, he too reported that it had been a coup.  It  subsequently came to light that the Obama Administration had started preparing the coup inside the U.S. Embassy in Kiev by no later than 1 March 2013 — almost a year prior to the coup.   The even earlier preparation for the coup by CIA-affiliated ‘nonprofit’ or NGO organizations (funded by the West and its corporations) which lay the groundwork for this coup has been brilliantly documented at some online sites.
None of this information has been widely published — it’s virtually impossible to have it published in the West.  Though the potential audience for it might be vast (especially since the population of the Western countries involved pays much of the tab for this operation and yet receives none of the benefits from the resultant looting of Ukraine, all of which goes to the U.S. and allied economic and political elites), there is virtually zero willingness  to report it because the West’s news media have all (except for a few small, independent ones like this) been taken over by today’s equivalent of the feudal aristocracy, whom they serve — rather than the public (their audiences, whom they’re in business to deceive).  The companies owned by the oligarchic elite advertise in, and thereby fund, most of the corporate news media, and the governments they serve fund the rest.
Though the transfer of Crimea from Ukraine to Russia is treated by Western ‘news’ media as having been a ‘conquest’ by Russia, and as being Russia’s ‘seizure’ of Crimea, and Russia’s ‘stealing’ Crimea, nothing of the sort is true.  Crimeans had good reason to be terrified of the Obama-coup regime that had just been installed in Kiev, from which Russia saved Crimeans, but the lie needs to be promulgated so that the West’s invasion of Russia may be organized and carried out.
To make the facts about the 2014 coup in Kiev public to Westerners would jeopardize not only the Western economic sanctions against Russia but would also jeopardize the preparations by all of NATO for a war against Russia.  Both the sanctions and the planned war would have no support among the Western public if this history — and that fact that it all began with a violent U.S. coup in Ukraine — were to become known before the U.S. and NATO invasion occurs.  So the facts remain suppressed in the ‘democratic’West.