Jenna’s “best friend,” Prancer, successfully had her cancer-ridden hind leg removed and is back home with us recovering. 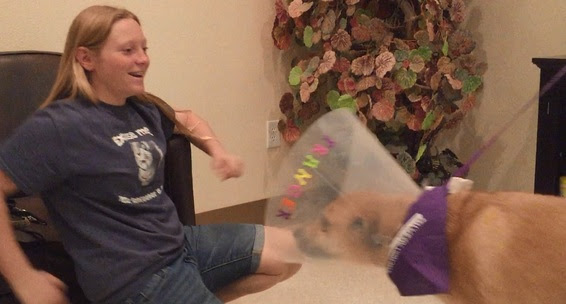 That’s a pair of happy campers!

Tissue samples were taken during the operation to determine if the cancer had spread before amputating the leg.  We’re told after the tests come back in a week or so that Prancer will probably have to take a chemo pill every week for 5 or 6 weeks to kill any cancer cells that might have spread.

But as they say, in for a penny, in for a pound.  Jenna’s gonna be doing a lot of odd jobs and chores for the next few months to augment the money raised via her GoFundMe campaign for the operation.

P.S.  Congratulations to our good friend and conservatarian ally Wayne Allyn Root on being hired by the Las Vegas Review-Journal to ink a twice-a-week political column.  He’s replacing Jon Ralston, whose RJ liberal column of partisan pabulum was axed many years ago.

(Chuck Muth) - In memory of the recently deceased political talk-show host John McLaughlin, here are three things you can depend on with “meta-physical certitude.”

One, the sun will rise in the east.  Two, temperatures in Death Valley will exceed triple digits in August.

And three, liberal blogger Jon Ralston will ink a misleading column on an important Nevada issue out of personal pique against one or more of the parties involved.

But for whatever reason – maybe Mr. Adelson forgot to send him a dreidel for Hanukkah last year or something – Ralston has been taking every opportunity to sabotage the project by hyping, tabloid-style, misleading information about it.