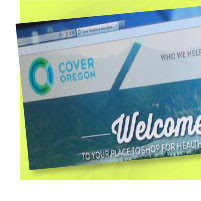 If it's possible to do a worse job on health care than the federal government, Oregon has. The Beaver State is making ObamaCare history this week, becoming the first state to quit its own exchange and move to the federal system. After sinking $130 million into Cover Oregon, the state's enrollment program, the system's bugs were so irreparable that Oregon officials ultimately threw up its arms and surrendered.
The charade of efficiency is finally over for the state, which didn't manage to enroll a single person in ObamaCare through its website -- and instead spent millions of dollars to sign up 69,000 people on archaic paper applications. As if that embarrassment weren't enough, local reporters broke a story back in February that the project's managers "may have designed fake web pages on the exchange site "to convince the federal government the project was further along than it actually was," according to KATU.com.

The elaborate bluff, which went back as far as 2012, was done "to keep the money flowing" since the website was required to hit specific benchmarks between 2011 and 2013. The state needed to show the feds it had picked a company to provide software and technical assistance; it had to demonstrate that the website was safe from hackers; and, most importantly, it had to show that people could actually sign up for insurance on the website."
With more than $200 million down the drain, taxpayers are furious. "Cover Oregon is the worst financial failure in information technology in state history," said a frustrated Congressman Greg Walden, "and it was completely avoidable. Today's admission of failure underscores the need to stop the waste and get the truth."
Meanwhile, Oregon isn't ObamaCare's only black eye. California is already way over budget on its exchange, and Nevada and Massachusetts have yet to build functional websites. In Maryland, which is Oregon's biggest competition for the worst implementation of ObamaCare, leaders spent $90 million on a website that is so dysfunctional that officials are scrapping it for Connecticut's model. The price tag for that failure? Another $40-$50 million. For now, states are scrambling to explain disaster zones like Hawaii, which spent $204 million to sign up 8,000 people for health care. (For those of you keeping score at home, that's $25,000 per enrollment.)
Elsewhere, experts are scratching their heads on the obscene amount of money the federal government is funneling to states like Vermont, which is enjoying a sky-high $168 million to set up an exchange for a noticeably smaller population. Unfortunately, this is what happens when you go to Nancy Pelosi's school of political management. Leaders rushed ObamaCare through without even reading the bill and consider whether what it called for was even feasible. And what do we have to show for it, billions of dollars later? Inoperable websites, crushing debt, less coverage, wasted time, and wasted money. 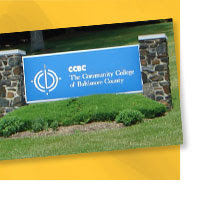 Radiation therapy can be dangerous to patients -- and sometimes, to students. Brandon Jenkins found that out the hard way when he applied to a radiation therapy program at the Community College of Baltimore County. Despite solid grades, the director of the department took issue with Brandon's faith, suggesting that it was a disqualifying factor in his application.
"I understand that religion is a major part of your life," Adrienne Dougherty emailed, "and that was evident in your recommendation letters, however, this field is not the place for religion. We have so many patients who come to us for treatment from many different religions and some who believe in nothing at all." For Brandon, who hadn't really mentioned his Christianity, it was stunning. The only time the issue even surfaced was when he was asked what the most important thing was to him. He replied, "My God."
Looking back, Brandon wonders if those two words cost him a spot in the college's program. It certainly seemed so when Dougherty closed her email with this bit of unsolicited advice: "If you interview in the future, you may want to leave your thoughts and beliefs out of the interview process." David French, Brandon's attorney with the American Center for Law and Justice, said that what shocked him most was how open the College was about its intolerance. "While colleges routinely discriminate against Christians, rarely do they state their discrimination so explicitly."
As far as most experts are concerned, Brandon has a slam-dunk discrimination case if it ever gets to court. Essentially, the College is saying that when it comes to the radiation field, Christians need not apply. Unfortunately, we're seeing this effort to quarantine faith bleed over to into every profession -- from the military to academic and even sports. And a lot of it can be traced to the Obama administration's climate of religious hostility, which is so deeply engrained that liberals aren't even hiding their agenda anymore.
Like Dougherty, they're shockingly candid about their prejudices toward faith and the priority they place on snuffing it out. That kind of brazen attack on faith would have stunned the founding fathers, who viewed religion -- and specifically Christianity -- as the guiding light informing every aspect of our life. As far as they were concerned, it was more than permissible to embrace faith -- it was necessary for a successful republic. This kind of religious oppression has no place in America, particularly at a public institution like Baltimore College, fueled by taxpayer dollars. 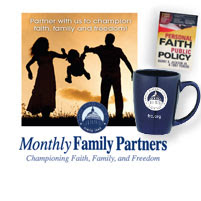 For over 30 years -- because of the faithful supporters like you -- Family Research Council has remained proven, positioned and prepared to accomplish our mission: to advance faith, family and freedom in public policy and the culture from a Christian worldview. I want to remind you to take advantage of a special program we have just for you -- our friends. FRC's Monthly Family Partners program allows you to conveniently and automatically partner with FRC each month from your bank account or credit card. No gimmicks. You'll have the satisfaction of knowing you are a vital part of the FRC team promoting life, marriage and religious liberty on Capitol Hill, in the media, and across the nation.
Your ongoing financial support greatly increases FRC's ability to voice your values in the essential policy debates that are shaping America's future. As a small token of our appreciation, for a limited time, when you sign up as a Monthly Family Partner you'll receive two free items including my book, Personal Faith, Public Policy and our FRC ceramic coffee mug. Click here to learn more about becoming a Monthly Family Partner with FRC and how you can make a difference today. We're all stronger when we stand -- together!
** If you're in the Baton Rouge area, join us at Greenwell Springs Baptist (19421 Greenwell Springs Road; Greenwell Springs, LA 70739), where I'll be preaching the 8:00 a.m. and 10:30 a.m. services on the message: "Did the Devil Take Paul Harvey's Advice?"
Tony Perkins' Washington Update is written with the aid of FRC senior writers.
Posted by Lee S. Gliddon Jr. at 2:37 PM