NEOCONS HAVE NO PLACE IN TRUMP'S ADMINISTRATION - GRAHAM AND McCAIN THINK THEY DO!

Trump's "De-Neoconization" Will Be Unleashed, McCain and Graham Stirring War in the Balkans

Commentary by Capt. Dave Bertrand (Ret.)
December 30th, 2016
Friends and Associates:
We hear the term "NEOCON" all the time and place it in the back of our minds, but what we are seeing lately brings the term to a dangerous level in politics and world affairs.
A "NEOCON" is basically a bastard of both parties, posing as a "Conservative" with righteous ideals they spew in an attempt to gain support for re-election. A "NEOCON" will sell YOU out in a heart beat when a transaction with other government leaders assures their re-election and profit margin.
Two of the biggest NEOCONS are currently in the Balkan countries, drumming-up war efforts against Putin and signing contract deals for more arms. John McCain and his limp wrist side-kick, Lindsey Graham are off AGAIN to stir-up contempt and lies for a confrontation with Russia, of which McCain once told Trump...."Don't you dare make peace with Russia."
Let us not forget that it was McCain that wanted Obama to send 20,000 U.S. military troops to Syria, after his failed attempt to help further a renewed ISIS re-organization in Syria, paying 5 guys (he found) $5 million dollars and a shipment of arms, smuggled from Libya, to organize ISIS (under the command of the Obama Administration and Saudi Arabia)...BUT, oh well, the 5 guys took the money and were never found again, except...ISIS did expand in Syria, but with little to no control by the U.S.
Like a protective "helicopter mom" over the ISIS insurgency in Syria, dubbed "The Rebels," U.S. / CIA continue to pave the way to Assad for ISIS while Putin destroys ISIS in the meanwhile. Now that Putin has sealed a "Cease Fire" with the "Rebels" the Obama legacy and the biggest thorn in Obama's skinny butt, worse than Putin....is Trump.
"Never let a good crisis go to waste," is the latest two-fold event to show toughness by Obama while his legacy as the "worst president in the history of the United States" flowers like a dead rose at a funeral. The expulsion of 35 Russian Diplomats, termed by the NEOCONS as "Intelligence Operatives,"  will backfire on Obama as the Trump Administration takes-over the insanity at 1600 Pennsylvania Ave. 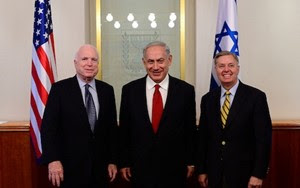 Creating an unsolvable situation with Israel while painting Trump as a Russian sympathizer / agent, will be used by the fakestream media as their new talking point(s) after the 20th when Trump attempts to clean-up Obama's mess.
The mess makers of course, are the two NEOCON goons that continue to take trips to the Middle East and now the Balkans, to drum-up support for war and new contracts for their (employers) the Military Industrial Complex.
The presidential transition has turned from "smooth" to "ridiculous."
President Elect Donald Trump must be squirming to unleash his selected cabinet members to determine which one of them are going to remain loyal to their NEOCON attempt(s) to stop Trump from "draining the swamp."
Hopefully, Trump will instruct AG Jeff Sessions to go after the war criminals that have destroyed the United States credibility in this world that will end-up in WWIII if Obama isn't restrained immediately.
"Congressional leaders know which congressmen and senators are controllable--and most of them are. Only a handful of our federal congressmen and senators are “untouchable.” My guess is less than 100 out of the 535 House members and U.S. senators are truly NOT controlled--and that includes liberals and conservatives." ---Pastor Chuck Baldwin
Contributor: Priscilla Espinoza
"Only by engaging in a systematic policy of “de-neoconization” of the US political establishment will Trump have any hopes of “making America great again”. If Trump’s plan is to appease the Neocons long enough from him to be sworn in and have his men approved by Congress – fine. Then he still has a chance of saving the USA from a catastrophic collapse, but only as long as he remains determined to ruthlessly crack down on the Neocons once in power."
http://www.unz.com/tsaker/neocon-panic-and-agony/
From The Desk of  Capt. Dave Bertrand (Ret.)  Int'l Airline Freight Captain (DC-8 & B-727 & First Officer DC-10), U.S. Army Veteran, Law Enforcement Background. Political Analyst  and Activist to help "Make America Great Again.
My mission is to slice through the propaganda, encourage everyone to write  and share important news among our network of patriots, military, law enforcement and selected news media sources (we trust). We are the pulse of America and we will prevail.
Posted by Lee S. Gliddon Jr. at 2:12 PM