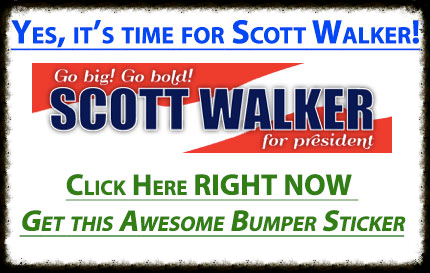 I would like to give you an account of Gov. Scott Walker's participation at the Southern Republican Leadership Conference, as reported by the Washington Examiner's Timothy Carney.
He offers some bold, encouraging insights on Scott Walker and the presidential field:
"The conference revealed a Republican base that is (1) broadly happy with the crowded and conservative field, (2) still smitten with Wisconsin Gov. Scott Walker, and (3) unimpressed and uninterested in Florida Gov. Jeb Bush."
Straw Poll
"The straw poll results mostly reflected Scott Walker's popularity, and the apprehension the Republican base has for Jeb Bush and Chris Christie, the perceived establishment moderates in the field.
Dr. Ben Carson won the straw poll handily, thanks to his having the biggest organized effort. His campaign bought a booth and bought 100 tickets, to allow supporters to attend for free. Many of these supporters came in from out of state. All told, Carson won about 240 votes."
Biggest Winner
"The biggest winner may have been Wisconsin Gov. Walker, who finished a close second, with about 200 votes. He had no organized effort to win the straw poll, but he still won the most votes among Oklahomans in the crowd.
His Friday afternoon speech was spot-on...Walker was able to tick off a long list of legislative accomplishments, touching on all the major conservative policy priorities: cutting spending, cutting taxes, bringing the bureaucracy to heel, defunding Planned Parenthood, expanding gun rights, passing right to work, requiring photo ID for voters and so on."
The word "front-runner" can carry many meanings, but it probably fits Walker at the moment."
Biggest Loser
"Bush was the loser of the weekend - except maybe when it came to fundraising from the oil and gas barons in OKC.
Bush's speech was the worst of the bunch. The delivery was flat and uninspired. He didn't seem to want to be there, and it looked like he barely wanted to be running for president."
A GOP Reality Check
In the past two presidential elections, the GOP Establishment told conservatives that only a Republican moderate with a bipartisan flare for working with the Democrats could defeat the radical Obama.
Of course, the GOP Establishment was wrong then and wrong NOW.  Obama ate our lunch in 2008 and 2012 - and America continues to suffer gravely.
Isn't it time to nominate a CONSERVATIVE Republican for President - a WINNER - who has the courage to fight the Democrats - and take back America? 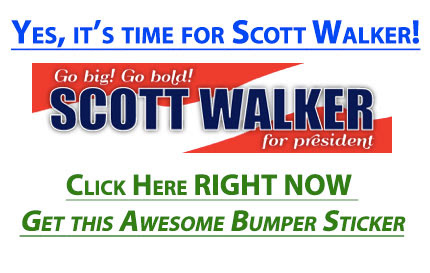 After 6-1/2 miserable years of Obama's wrecking-ball of a failed Presidency, isn't it time for a conservative American President with the 'guts' and courage to make America great again?
Let's bring bold, conservative leadership to America - Scott Walker 2016
Go Here to Pledge Your Support Right Now!

Thank you for everything that you've already done.
Sincerely,

Mail in contributions can be sent to the following address: