In 50% Black/40% White Richmond, Virginia, 95% of Known 2016 Homicide Suspects Were Black
PAUL KERSEY • MAY 11, 2017
•
Somehow, this is the fault of Monument Avenue in Richmond, Virginia, where statues honoring brave Confederate soldiers stand tall, a reminder of time when egalitarianism wasn’t the highest moral virtue of the land.
Whereas in 2015, 97% of homicide suspects inIn 50% Black/40% White Richmond, Virginia were black, 95 % of known homicide suspects in 2016 were black. That’s a slight drop, but homicides were up significantly in the city and Richmond region. 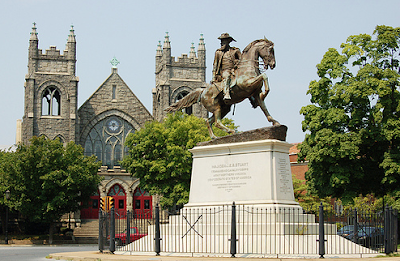 Somehow Monument Avenue in Richmond is compelling blacks to kill each other…
Obviously, this is the fault of statues still standing to dead white males, be they Confederate soldiers or men such as Jefferson or Washington.[Regional killings soar past 100, reach highest level in decade, Richmond Times-Dispatch, 2-18-17]:

Killings across the Richmond region soared in 2016 to the highest level in more than a decade, with African-Americans suffering the greatest loss of life at 81 percent of all victims.
Homicides in the region’s four cities, three towns and 16 counties with a collective population of 1.26 million jumped 24 percent, from 98 in 2015 to 124 last year — the highest tally since 2005, when 132 killings occurred, according to a Richmond Times-Dispatch analysis of regional homicide data.
The distressing loss of black lives continued at a disproportionately high pace in 2016, with 101 of the 124 victims, or 81.4 percent, identified as African-American. That’s the second-highest percentage since at least 2010, when the newspaper began tracking the race of homicide victims and their assailants. The highest rate, 81.6 percent, was recorded in 2015.
The percentage of black victims leaped from 2014 to 2015 and dipped by only a fraction last year.
“An interesting contrast exists between rates of intra-race violence,” said criminologist William V. Pelfrey, an assistant professor at Virginia Commonwealth University’s L. Douglas Wilder School of Government and Public Affairs. “African-Americans are disproportionately represented — well beyond their population numbers.
“Approximately 30 percent of residents (in the Richmond region) are African-American, while black-on-black violence is much higher than one would expect,” Pelfrey added. “Latino violence appears to be low relative to their numbers in the population,” which is between 3 and 5 percent of the region’s residents.
At the region’s center, 59 African-Americans were killed in Richmond, accounting for 88 percent of the city’s 67 homicide victims in 2016.
That number includes five black lives lost in self-defense, or “justifiable,” fatal shootings, which police are not required to count under state and federal crime reporting guidelines, and a sixth suspicious shooting death that remains unresolved.
“Concentrated poverty has a direct correlation to this tragedy,” Reginald E. Gordon, director of Richmond’s Office of Community Wealth Building, an antipoverty initiative started in 2014 designed to improve access to educational and economic opportunities to city residents. “In order to address the problem, we need to learn as much as we can about the men who died.”
“I will make an assumption that if we dissected their respective life stories we would see predictable patterns like under performance in school, traumatic experiences during childhood caused by lack of resources, and the inability to find or have access to a job that paid them enough money to provide for the basic needs for themselves and their families (and) save and cover any unexpected financial challenges,” added Gordon, who before taking his current job last year spent nine years overseeing the Greater Richmond Chapter of the American Red Cross.
“If this is the shared experiences of hundreds, if not thousands, of residents of Richmond, then it would be undeniable that finding solutions to these systemic and structural issues is a matter of life and death,” Gordon said.
Richmond Police Chief Alfred Durham said what people tend to forget is that there has been a “disinvestment” over the last 20 or 30 years in city services such as education, mental health and drug treatment that is creating dysfunction — and crime — in the community.
“There are so many broken-down systems, and a lack of support systems here for those people,” Durham said. “So guess who’s dealing with all of those people? The police.”
“You have to look at the systemic, socioeconomic issues” that can spawn violence in the community — “poverty, unemployment, underemployment and education,” Durham added. “We are overwhelmed. The police departments today across this country, to include the city of Richmond, are being asked to do too much. We’re taking on (missions) that we’re not built for, that we’re not trained for, but we have to get the job done.”
Durham also is frustrated by an alarming lack of witness and community cooperation, “especially in our poverty-stricken neighborhoods” where a code of silence stymies investigations. That’s the sad reality in up to 80 percent of the killings police investigate, the chief noted.
Once again,the proportion of black homicide victims in the Richmond region last year greatly surpassed state and national percentages, which stood at 64 percent and 52 percent, respectively, of total reported homicides.
Just over 7,000 of the nation’s 13,455 homicide victims in 2015 were black, according to FBI crime data for the most recent year available. And 243 of the 382 people killed in Virginia in 2016 were black, state figures show.
Blacks represent about 13 percent of the U.S. population and 19 percent of Virginia’s residents.
The exceptionally high rate of black victims is one side of a deadly equation that includes an equally disproportionate number of black offenders.
Of the 112 homicide suspects identified by police so far in last year’s regional killings, 102 are African-American, or 91 percent of the total. That’s up from 88 percent in 2015.
In Richmond, 95 percent are black, down from 97 percent in 2015, the data show.
The Black Lives Matter movement continued to command attention both locally and nationwide with protests and demonstrations related to a number of police-involved killings of black men by white police officers that in some cases sparked outrage.
There were two fatal police shootings in the region last year, but neither involved circumstances that drew activists’ attention.
An Illinois man, James Brown III, 34, was fatally shot by state police March 31 at the Greyhound bus station in Richmond after Brown suddenly and without warning shot and killed Trooper Chad P. Dermyer during a training exercise at the station.
After Brown, who was black, fired, two troopers — one white, one black — returned fire, killing him. The Richmond commonwealth’s attorney found no racial component to Brown’s killing and ruled that Brown was the unprovoked aggressor who initiated the fatal force against Dermyer.
A Hopewell man, Boyd Keith Ballard, 61, was shot and killed March 20 in Hopewell by a city officer after he charged the officer with a knife.
Hopewell’s chief prosecutor determined that it was a clear-cut case of “suicide by cop.”
The shooting, which was recorded on a police body camera, occurred after officers were called to a Ballard family member’s apartment after Ballard used a knife to wound his daughter’s boyfriend during an argument. Both Ballard and the officer were white.

“Latino violence appears to be low relative to their numbers in the population.” 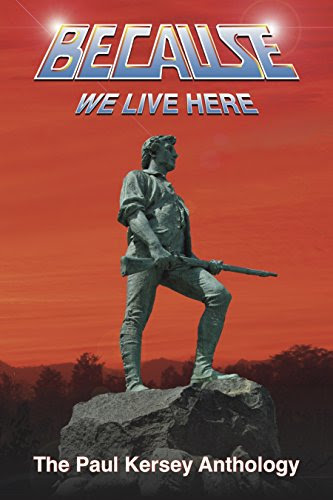 What about white violence, which appears to be almost nonexistent in Richmond, Virginia and the Richmond region? Indeed it appears to be an absoluteanomaly, an aberration only appearing in fits of true mental illness, whereas black crime is concentrated, persistent, and about the only type of criminal activity police deal with in the region.
Monuments and statues will rise, and they will be torn down; cities will be built and abandoned; but if we survive, new statues will built, new cities rise, and new stories will be told of our glory.
All we must do is survive.

To be removed from future mailings, simply reply with word "remove" in the subject line.

"INSIDE EVERY PROGRESSIVE IS A TOTALITARIAN FASCIST SCREAMING TO GET OUT"
https://www.youtube.com/watch?v=5OVdoTDuKT0&feature=youtu.be
Posted by Lee S. Gliddon Jr. at 2:05 PM