On ICE, Democrats abandon the mainstream

Despite public opposition, numerous Democrats continue to call for U.S. Immigration and Customs Enforcement (ICE) to be abolished. It’s a belief that falls squarely outside the American mainstream: According to a recent POLITICO/Morning Consult poll, only 25 percent of voters support getting rid of ICE.
A majority of Americans know we must keep ICE, and for good reason: Eliminating this crucial piece of our national security force would grind immigration enforcement to a halt, with devastating consequences for public safety. Abolishing ICE would mean abolishing the agency responsible for removing drug dealers, gang members, and other criminals who exploit America’s border to take advantage of our communities.
The numbers don’t lie. Criminals arrested by ICE during the 2017 fiscal year were responsible for:

Our immigration law enforcement officers work in dangerous conditions to protect our communities. We must stand with them. Recently, 167 Democrats in the House of Representatives refused to vote for a resolution to support these border officials. “To the courageous public servants at ICE, men and women, we want you to know that the American people are with you and my administration has your back 100 percent,” President Trump said in his most recent weekly address.
Watch President Trump’s weekly address on immigration enforcement.
The facts: Abolishing ICE would open the floodgates—to crime, drugs, and terrorism

Yesterday in Hawaii, the remains of 55 U.S. Service Members were returned to American soil. Vice President Mike Pence traveled to Honolulu to welcome them home.
The return comes as part of President Trump’s negotiations with North Korean leader Kim Jong-Un. The President thanked Chairman Kim for honoring his word. “Incredibly beautiful ceremony as U.S. Korean War remains are returned to American soil,” the President tweeted. “Thank you to Honolulu and all of our great Military participants on a job well done.”
“Some have called the Korean War the ‘forgotten war.’ But today, we prove these heroes were never forgotten,” Vice President Pence said. “Today, our boys are coming home.”
Watch Vice President Pence’s tribute to these fallen American heroes.
More: The Korean War heroes who “didn’t get to come home”

Photo of the Day 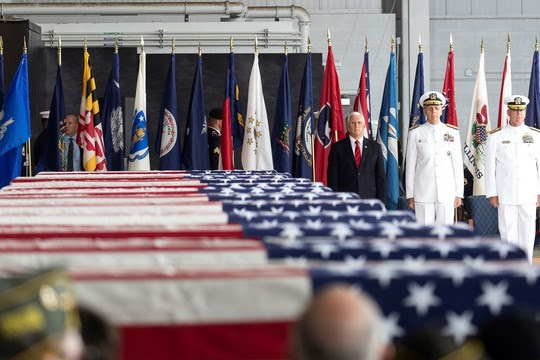