Subject: General Flynn Case Discovery Is About To Rock The Impeachment Trial, CIA/FBI/DIA and Obama Exposed For Treasonous Acts Against The United States
Friends and Associates:
While boredom with the sham impeachment trial continues.....everyone knows how it will end with President Trump exonerated of any and all "crimes" (that are not written in any law book or statute), the [DECLAS] declassification of everything "Spygate" will be released, and all those involved in one of the most greatest and absurd scandals in the history of the United States, the preparations for justice are underway.
A newly released report concerning one phase of how Obama's conspirators, the top players in the CIA / FBI and DIA, in conjunction with the DNC, Hillary Clinton, Christopher Steele, Fusion GPS, Crowd Strike, Ukraine, Australia and British Intelligence Agencies, etc, etc, etc surrounds General Michael Flynn.
The fired (former) National Security Adviser for the Trump administration, General Flynn is about to be exonerated by Judge Sullivan as (Obama) prosecutors raise holy hell in the meanwhile.
Removing Flynn from the 'Russiangate' conspiracy theory, which the House Dems need desperately [not to happen]....Flynn was set-up by Obama and the CIA in-order to put the "icing-on-the-cake" to show the American (Trump) supporters a sense of credible / validity by the Dems to prove their case of "Russian Collusion," even though the Mueller Investigation proved nothing.
The Mueller Report was a major disappointment for the [Schiff for brains] circus we've been watching, and by losing Flynn as the alleged conspirator involved with a (fake) Russian agent in a 'honeypot' arrangement has failed.....the 'honeypot' [Russian Agent] Svetlana Lokhova (Professor at Cambridge University) was sold-out by her mentor, Professor Christopher Andrew....of whom was being recruited by CIA operative Stephan Halper, of whom was paid a million bucks by Obama's 'Office of Net Assessment' (ONA) to spy on the Trump campaign.
Together with Brennan, Clapper, Comey, they created situations at the same time Hillary was financing the 'Fake Dossier' and destroying her emails....along with false FISA warrants, to using human assets to infiltrate and set-up certain individuals before and after Trump was elected.
On top of it all....certain journalists were recruited by Brennan's CIA and Comey's FBI.....including Clapper (DIA) to leak and create fake stories in-order to convince the American people that an 'Impeachment' was necessary, basically a full blown 'Coup' to take-over the United States government based on lies and illegal acts that about to be revealed.
President Trump and the 'Patriot White Hats' have it all, every detail, every traitor involved, and waiting for the Senate to shutdown the impeachment trial before proceeding.
However, it is my opinion.....certain crimes will be held-back from the public until such time, the public as a whole, understand the complexity of how 'spygate' started, those involved and why it was absolutely necessary for the Democrat Communists to use their last remaining ammo as the 'impeachment' cover-up of their own crimes.
The Dems know exactly what's at stake for them and the pressure is on.....
They know the Senate will exonerate Trump, but will continue to call it a "Republican Cover-up" in hopes of bamboozling the public for as long as they can, as we approach the November re-election of Donald J. Trump.
This next week during the 'impeachment trial' the lawyers will state their case to counter the crap spewing from Nadler and Schiff this week. They have nothing and continue to spin the so-called facts into their favor.
REGARDLESS if Trump did in-fact OPENLY tell the Ukrainian President Zolensky, or through certain aides...."I'M HOLDING MILITARY AID UNTIL YOU INVESTIGATE HUNTER BIDEN," which is NOT the case, but if it was true, there is no statute or law that prohibits Trump from making that statement. Presidents have a long history of holding back aid to a country for various reasons.
The House Dems want YOU to believe, the "aid" was held-back in-order to interfere with the 2020 election, as if to say....Biden will be Trump's contender, while the DNC doesn't even want Biden !
In-fact....Trump would clean the debate floor with Biden at every turn, including his own 'Quid Pro Quo' with Ukraine ! Trump would welcome Biden as the face of the Democrat Party!
REALITY THOUGH, reference the July 25th phone call between Trump and Zolensky and the question about investigating 'Crowd Strike,' (Not Biden) the company used by Hillary and the DNC to validate [fabricate] the 'Russian Hacking' of the DNC server (2016) is the BIG COVER-UP of the Seth Rich murder and the Julian Assange connection.
Seth Rich was a DNC staffer.....ticked-off that Hillary and the DNC knocked Bernie Sanders out-of-the-race, and HE decided to download the DNC server of all emails for Wikileaks. That's what the BIG COVER-UP actually is, not Russia.
The impeachment is the cover-up, and the Democrats in the House, including the DNC controlled by Hillary Clinton and ALL THOSE previously involved, have destroyed their own party, and any hope for escaping justice is nothing but a bad dream as the hammer is about to fall....
--Dave Bertrand

Tyler Dy
Stephan Halper, the longtime CIA and FBI operative who conducted espionage on the 2016 Trump campaign, was feeding information to Washington Post reporter David Ignatius through his handler, according to The Federalist, which describes his actions as "more evidence that the intelligence community has co-opted the press to push anti-Trump conspiracy theories." 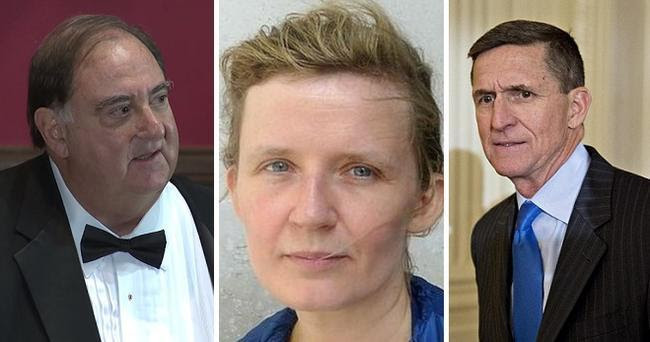 According to a court filing by Michael Flynn's defense team, Halper's 'handler' in the Office of Net Assessment (ONA), Col. James Baker, "regularly lunched with the Washington Post reporter."
(Also leaking to Ignatius was Christopher Steele)
As we noted in May of 2018, Halper was paid over $1 million by the Obama administration through the Office of Net Assessment - nearly half of which came during 'Russiagate' - in which he not only surveilled multiple Trump campaign aides, he was involved in an effort to tie General Flynn to a Russian academic, Svetlana Lokhova, as part of a smear campaign.

Svetlana Lokhova, the Russian-born English citizen and Soviet-era scholar, told The Federalist that she only realized the significance of her communications with and about Ignatius following the filing of attorney Sidney Powell’s reply brief in the Michael Flynn case.
In last week’s court filing, Powell highlighted how the CIA, FBI, Halper, and possibly James Baker used the unnamed and unaware Lokhova and the complicit Ignatius to destroy Flynn. This James Baker is not the one who worked under James Comey at the FBI, but a James Baker in the Department of Defense Office of National Assessment. -The Federalist

Stefan Halper is a known long-time operative for the CIA/FBI. He was paid exorbitant sums by the FBI/CIA/DOD through the Department of Defense Department’s Office of Net Assessment in 2016. His tasks seem to have included slandering Mr. Flynn with accusations of having an affair with a young professor (a British national of Russian descent) Flynn met at an official dinner at Cambridge University when he was head of DIA in 2014. Flynn has requested the records of Col. James Baker because he was Halper’s ‘handler’ in the Office of Net Assessment in the Pentagon, and ONA Director Baker regularly lunched with Washington Post Reporter David Ignatius. Baker is believed to be the person who illegally leaked the transcript of Mr. Flynn’s calls to Ignatius. The defense has requested the phone records of James Clapper to confirm his contacts with Washington Post reporter Ignatius—especially on January 10, 2017, when Clapper told Ignatius in words to the effect of ‘take the kill shot on Flynn.’ It cannot escape mention that the press has long had transcripts of the Kislyak calls that the government has denied to the defense.

Lokhova sued Halper and multiple MSM outlets for defamation after Halper-fuelled rumors that she was a Russian spy who had 'honeypotted' Flynn, which were first promoted by Lokhova's mentor at Cambridge University - Professor Christopher Andrew, who wrote in the London Sunday Times in February 2017 that her brief meeting with Flynnn during a 2015 dinner event was the beginning of the former National Security Adviser's relationship with a Russian spy.
Prior to Andrew's article, other outlets such as the Wall Street Journal, Washington Post and the New York Times had published rumors of a Flynn connection to a supposed Russian spy, however Lokhova had no clue it was her until she was outed.
"Halper had been pushing the story that I was a Russian spy and Flynn’s mistress since December of 2016," Lokhova told The Federalist. "The New York Times’ Mathew Rosenberg told me a source had been circulating these stories since December 2016," she said, adding "but they held the story until they could find a second source and someone at the Cambridge dinner."

In his book “The Plot Against the President,” Lee Smith confirms that the story about a Flynn-Lokhova intrigue was circulated to the press starting in December 2016.
But it wasn’t until the Wall Street Journal published its March 17, 2017, article suggesting she had inappropriate contacts with Flynn that Lokhova discovered the earlier article Andrew had written about her for the Sunday Times, Lokhova said. Before then, within days of February 28, 2017, several journalists reached out to her for comment, including two working for the Wall Street Journal, but Lokhova didn’t know why.
She also didn’t comprehend who the inquiring journalists were at the time. That remained true even after her mentor and unknown betrayer, Andrew, wrote Lokhova telling her that “David Ignatius of Washington Post is in UK at moment. I’ve known him for years and trust him. I’ve given him your email and he accepts that if you don’t wish to respond, that an end to it.” -The Federalist

Via The Federalist
It is unknown what Andrew meant by Ignatius's "inside track," however the above email was sent to Lokhova just one month after Ignatus reported the illegally leaked details of Flynn's conversation with Russia's ambassador - leading to his firing.
Read the rest of the report here.
https://www.zerohedge.com/political/russiagate-spy-paid-1-million-obama-admin-was-wapo-deep-throat